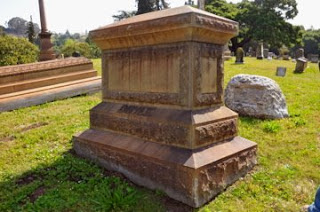 William Henry Bovee was born in New York City in 1823. On his mother's side of the family he was related to the Knickerbockers of New York. He graduated from Kethchum School #7 at the age of 15 and moved to Sandusky, Ohio where he worked as a clerk in his uncle's boot and shoe making shop. At age 19, he married Elizabeth Marshall.

Bovee did not like Ohio and promptly returned to New York where found a fulfilling job at a coffee warehouse. He then accepted a job with Hope Mills, one of the leading coffee and spice companies in the country. However, after hearing about the discovery of gold in California, he boarded the Apollo on January 12, 1849 and set sail for San Francisco. He disembarked in Rio de Janeiro and finished his journey aboard the Xylon.

Bovee tried his hand in the gold fields near Sutter's Mill but after sending one of his men to buy provisions and losing all of his money, he decided to return to the coffee trade he had learned in New York. In 1850, William Bovee opened the first coffee roasting plant in San Francisco located at Broadway and Dupont . One of his employees was a 27-year-old named Jim Folger. There was no roast coffee then available in northern California and ground coffee was unheard of in the mining camps.

Bovee called his new business the Pioneer Steam Coffee & Spice Mill although there was no steam engine and the mill was often powered by Jim Folger’s hands. From his time digging for gold Bovee knew that ground coffee, ready to brew, was what busy miners would want. He roasted, ground and packaged ready-to-brew coffee in labeled tins. In 1859, Bovee sold his coffee company to Folger, who had gone to Auburn and struck gold. [Some accounts list the sale as 1865]. Bovee reinvested $250,000 in mining interests in Calaveras County and lost nearly everything.

Upon his return, he lived in Oakland for awhile and dabbled in politics. He was staunchly pro-Union and was elected to the Board of Alderman, Oakland City Council and Board of Education. Bovee served as Mayor of Oakland in 1863 and 1864.

In 1868, Bovee entered the real estate business with great success. In 1885, he created a real estate firm with his son-in-law called Bovee, Toy & Company Real Estate.

hey- i'm doing some work on oaklandwiki (well lots of work!), specifically on the city council members. i'm wondering where you found bovee's ties to the city council- i'd appreciate looking into that source!

your site is AMAZING and we've found it a great resource. we'd love to have you join in editing with oaklandwiki.org if you're interested :)