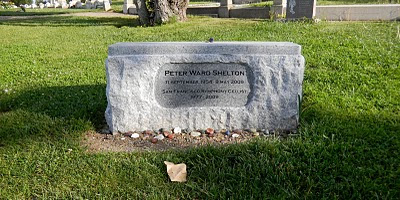 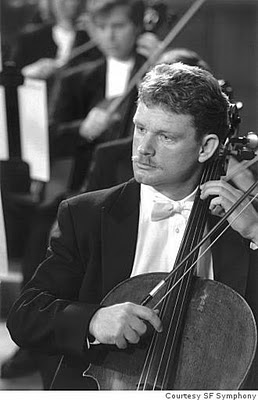 Cellist Peter Shelton, a musician of striking sensitivity and eloquence and a stalwart of the San Francisco Symphony's cello section for more than 30 years, died at his Oakland home after a long battle with HIV and cancer. He was 54.

Mr. Shelton spent most of his career as the orchestra's second-chair cellist.

His playing was marked by a warm, full-bodied string tone and a depth of expressiveness that could combine with the solidity of his technique to catch a listener unawares. His solo performances were infrequent but always rewarding, as when he undertook the prominent cello part in John Corigliano's Symphony No. 1 in 1991 and again in 1994.

Mr. Shelton's artistry shone particularly brightly in chamber performances. He appeared regularly on the Symphony's Chamber Music Series and the Mostly Mozart Festival, and premiered chamber works by Nicolaus A. Huber and George Perle as part of the orchestra's New and Unusual Music Series. He also co-founded the Chamber Music Sundaes series together with violinists Jorja Fleezanis and Lucy Stoltzman and violist Geraldine Walther, and appeared frequently on that series.

"We sat together for over 20 years," said principal cellist Michael Grebanier. "He was a fabulous stand partner and a terrific musician - totally conscientious, totally committed and he never screwed up.

"And on top of that he had a delightful personality. He was a real optimist, and a focal point for the entire section."

In a statement, Music Director Michael Tilson Thomas said, "It was a great joy and privilege to make music with him, from the first moment we met when I guest-conducted the orchestra over 30 years ago. The warmth and generosity of his spirit poured through every moment of his life and his music."

Thomas and the Symphony will dedicate their performances of Schubert's Mass No. 6 on June 10-13 to Mr. Shelton's memory.

Mr. Shelton was born in 1954 in Livermore, and began studying cello as a youth. In high school, he won the Diablo Symphony's Young Artists Competition. He earned a bachelor's degree in music from Stanford and a master's degree from the San Francisco Conservatory of Music.

Mr. Shelton made his first appearance with the Symphony at 18, playing Saint-Saëns' Cello Concerto No. 1 in a Youth Concert. He joined the orchestra in 1977, while a student at the Conservatory; in 2007, to mark his 30th season with the orchestra, he was awarded the Christine and Pierre Lamond Second Century Chair, the first named chair in the cello section.