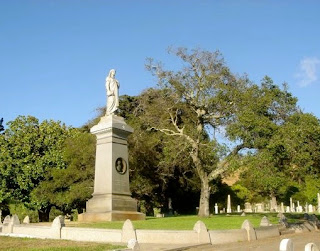 Born in New York in 1821, Ryer studied medicine and joined General Winfield Scott’s Mexican campaign as an assistant surgeon. He became medical director of three army hospitals in Jalapa, and after the defeat of Mexico, he brought the sick and wounded to New Orleans. Impressed with the opportunities to be found in California, he returned there after his army service and opened a medical practice in Stockton. This lucrative practice allowed him to invest in real estate and retire in 1861 at the age of 40.

In 1856 the California Assembly commissioned the respected Dr. Ryer to investigate the operations of the Stockton State Hospital for the Insane. Ryer later testified that the hospital administration, headed by a Dr. Langdon, was incompetent. Dr. Langdon was heard to say, "He [Ryer] is going to stick his nose into other people’s business once too often." One dark evening shortly thereafter, Ryer was accosted on the street and beaten with fists and pistol butts by Doctors Langdon and Hunter. Ryer warned the two that he was going to arm himself and hunt down Langdon. The news that one doctor was hunting for the other raced through the pioneer town. One of Ryer’s friends, versed in the Deep
South dueling culture, suggested they duel to settle the matter—even though the "bloody code" of dueling had been outlawed in California.

Ryer dutifully followed the required steps of written challenge, choice of seconds, and weapons (Langdon provided "hair trigger" dueling pistols), and the date for the duel was set. On a foggy morning, the two met by the San Joaquin River bank. Before the duel could commence, the sheriff appeared and put a stop to the proceedings. A few days later, two skiffs filled with "duck hunters" slipped over to the beach of Rough and Ready Island on a clear afternoon. At the first signal, Ryer’s hair trigger fired into the ground. Then Langdon’s gun cracked and the bullet whistled past Ryer’s ear. A second set of bullets did the same. "Once more," said Ryer. "Three shots for a blow—that’s the code, isn’t it?" Ryer’s third bullet struck Langdon in the leg, shattering his knee before

Langdon could squeeze off his own shot. Dr. Langdon died a cripple in 1880.

In 1860, Dr. Ryer married Mary Fletcher of Boston, and they had one child—Fletcher F. Ryer. Washington Ryer lived until 1892, a noted physician and pillar of the community.

Ryer Island in the Sacramento River delta is named in his honor.
Posted by Michael at 5:29 AM 1 comment:


There is a wonderful new book out called "Genius of Place: The Life of Frederick Law Olmsted" by Justin Martin. In the book, Martin describes how Olmsted came to design Mountain View Cemetery and what inspired him. I highly recommend this book and you can purchase it by clicking on the Amazon widget to the right. Here are two excerpts:

Unsettled in the West, desperate for money, Olmsted rattled this way and that. Tellingly, he reserved his greatest energy for seeking out landscape architecture jobs. Yet despite his enduring passion for the outdoors and his success with Central Park, he was less certain than ever that there was enough demand to make a living as a landscape architect.
The first project he embarked upon was actually one that he’d been handed while still supervising the Mariposa Estate. It was also his first solo commission, landed without Vaux. Now that his gold-mine obligations appeared finished, Olmsted turned his attention to the job.
The Mountain View Cemetery was to occupy 200 acres in the hills above Oakland. In preparing a design sans Vaux, Olmsted worked with a hired draftsman. As with Central Park, he showed an unusual sensitivity to the unique requirements of the site. He came up with a variety of thoughtful cemetery-design touches. Many of the people who would be buried in the cemetery were Chinese immigrants. So Olmsted’s plan included a “receiving tomb” to hold bodies temporarily until they could be returned to China, as was then the practice. There was also a preponderance of single men in California’s highly transient population, as Olmsted had noted. So his plan included an unusual number of single plots.
The land set aside for the cemetery was a bowl consisting of a flat, dusty floor surrounded by steep barren hillsides. When it came to plantings, this was quite a challenge. A stately canopy of elms was simply not going to be possible. Here again, Olmsted proved extremely imaginative, suggesting a tree – the cypress – that he believed would thrive on the grounds while striking the perfect note of reverence:
Being an evergreen, and seeming more than any other tree to point toward heaven, it has always been regarded as typical of immortality. For this and other reasons, it was considered by the Persians and Hebrews of old, as it is by the Turks and Oriental Christians of the present day, more appropriate than any other tree for planting about graves. Thuchydides mentions that the ashes of the Greeks who died for their country were preserved in Cypress; and Horace speaks of the custom among the Romans of dressing the bodies of the dead with Cypress before placing them in the tomb. It is the gopher-wood of Scripture, of which, according to the tradition of the Hebrews, the Ark was made; and it constituted the “exalted grove” of Mount Sion, spoken of in Ecclesiastes. Here, then, is a tree which seems peculiarly fitted by its associations, as well as its natural character, for your purposes.
Olmstead’s plan greatly pleased his client; he received a much-needed $1,000. He also chased several other landscape architecture projects, but with far less success.

Martin’s book also raises an interesting connection between Mountain View Cemetery and Golden Gate Park. One of the people buried in the cemetery is Henry Coon, who was Mayor of San Francisco at the time. Martin writes:

Another possible landscape job came from Henry Coon, mayor of San Francisco. He met with Olmsted, and the pair walked over a desolate, wind-whipped section of land. Apparently, there was some desire to create a park here. But the city commissioners and other interested parties were intent on a reprise of Central Park in San Francisco. Olmsted argued for a park more appropriate to the city’s climate and topography. Mayor Coon asked Olmsted to draft a proposal.

You can read my post about Henry Coon HERE.
Posted by Michael at 6:48 AM 4 comments: