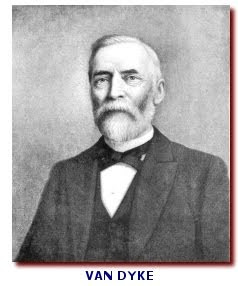 He moved to Ohio around 1846 in order to attend law school. Shortly after he was admitted to the Ohio Bar Association in 1848 word of gold being discovered in California spread like wildfire. According to his “Autobiography and Reminiscence of Judge Walter Van Dyke,” a group of his friends and acquaintances organized to make the trek west. Van Dyke says that it “did not require much urging” for him to embark on the adventure with thirteen of his friends.

The group met in Chicago and set off across the plains on June 6, 1849. They traveled much of the way along the 1,300-mile long Mormon Trail. When they reached Iowa, three members of the group headed home. Along the way, Van Dyke sent accounts of his trip back to his hometown newspaper in Cleveland. Upon reaching Las Vegas, he described the now glittering city as a “famous camping ground.” The group arrived eight months after they set off and miraculously suffered no illnesses or deaths, despite many hardships along the way.

He settled in the seaside town of Trinidad, California and began searching for gold along the coast just below the Klamath River at a place known as Gold Bluff. Finding only moderate success as a gold miner, he sold his interest in the Gold Bluff Company to Colonel A.J. Butler and returned to the practice of law.

In 1851 he was elected as the District Attorney of Klamath County. This led to Van Dyke serving in a rapid series of elected and appointed offices. When Humboldt County was organized a year later, he was elected to represent the area in the California State Assembly. In 1854, he was elected as the District Attorney for Humboldt County and became the editor of the Humboldt Times (dual careers that would be unheard of today). Prior to the Civil War, Van Dyke argued so passionately for the Union cause that he was dubbed the “Father of the Union Party.” After a brief stint in the California State Senate, he moved south to San Francisco where he practiced law. From 1874-1877 he served as the United States District Attorney for California. In 1878, he became an at-large delegate to the California Constitutional Convention. From 1885-1888 he served on the Superior Court bench in Los Angeles.

Van Dyke was elected to his final office when he successfully forged a coalition between the Democrats and the “Silver Republicans” and became an Associate Justice on the California Supreme Court.

On Christmas Day in 1905, Van Dyke died unexpectedly at his home on East Fourth Street in Oakland after suffering what he believed to be a severe cold. It turned out to a pneumonia.

Following his death, fellow cemetery denizen Governor George C. Pardee filled his vacancy on the court with San Francisco Superior Court Judge Marcus C. Sloss. Van Dyke was survived by his wife and five children. He was posthumously honored on both sides of the San Francisco Bay with streets named in his honor. Van Dyke Avenue in Oakland is off of Park Avenue in what was once known as the Ridgewood tract. Van Dyke Avenue in San Francisco runs through an industrial portion of the Bay View District off of 3rd Street.
Posted by Michael at 9:37 PM No comments: