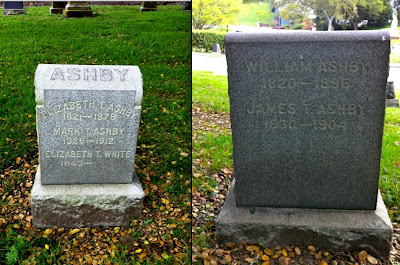 Mark and William Ashby were brothers who came to California from Massachusetts hoping to strike it rich during the Gold Rush. Like so many others, their dreams were of wealth were not realized and in 1856 they ended up buying property in what is now Berkeley. In 1857 and 1859 they bought additional property adjoining their farm, including land within the old Vicente Peralta property growing their land holdings to 187 acres.
In 1865 the brothers split their property, with William receiving the eastern edge adjoining College Avenue, which was then known as University Avenue.

Mark Ashby attended a series of meetings to consider a plan for a railroad and the incorporation of the town. There is no known record of William Ashby’s activities after the division of the property [If you know otherwise, please email me at Michael.Colbruno@gmail.com]. Ironically, Ashby Avenue ended up being named after William Ashby, whose property lined what is currently one of major streets in Berkeley.
In 1876, former California governor Leland Stanford and real estate developer Francis Kittredge Shattuck purchased a right-of-way for a steam train line that cut through the Ashby property and ended at Shattuck and University Avenues. This basically ended farming on the Ashby brothers property. Some accounts claim that they then got involved in the building of homes on the property.
The area soon became one of the cultural and community hearts of the city.