William S. Rheem (1862 – April 19, 1919), was and executive with Standard Oil in Chicago before being tranfered to the San Francisco Bay Area in 1901. That same year, Augustine Macdonald, the founder of Richmond, convinced William Rheem to buy some old farmland north of Point Richmond. Rheem needed to replace a refinery in Alameda that couldn’t be expanded due to the limited availability of land.

Within eight months Rheem completed construction of what is now the Chevron Refinery and transformed the rural area into a company town. A year after it opened the refinery was producing 10,000 barrels of petroleum. In 1902, Rheem opened the Richmond Belt Line Railrod to provide service to the bustling refinery.

After the refinery was completed, Rheem remained as the superintendent. Chevron remains the largest employer in Richmond to this day.

Rheem Creek a small river in the Hilltop District and Rheem Avenue in the Central Richmond District are named in his honor.

Rheem died of a heart attack in a restaurant on his way to Santa Cruz with his family.
Posted by Michael at 8:48 PM 2 comments:

Known almost exclusively as Chang Kia-ngau in the West, Zhang was born in 1889 in Baoshan District, near Shanghai. His grandfather was a Ch'ing dynasty official and his father a doctor, so he and his siblings enjoyed educational opportunities not available to most of their countrymen. While his brother, Carsun Chang distinguished himself in the world of politics, Chang Kia-ngau became a leading figure in modern Chinese banking.

Chang Kia-ngau was a supporter of reform in China and started his public service career in 1910 as editor-in-chief of the Official Gazette published by the Ministry of Communications. In 1913 he started his banking career assistant manager of the Bank of China in Shanghai. He distinguished himself just a few years later in 1916 when he refused a request by Yuan Shih-k'ai to stop redeeming banknotes for silver. The move was meant to secure silver deposits for Yuan's use, but would have undermined confidence in the new currency, so Chang disregarded the order and was instrumental in the bank's separation from the Peking government's control. By 1923, the Bank of China was almost exclusively owned by private, Shanghai-based shareholders, and during the next decade, it became the largest bank, by far, in Republican China.

Under Chang's leadership, the Bank of China resisted the Kuomintang government's pressure to return to government control and to purchase government bonds which would contribute to ever-growing deficits. In 1928, T.V. Soong tried quite aggressively to assert control over the bank, but Chang and the directors resisted, so Soong created the Central Bank of China. Chang agreed to finance the new central bank's creation in exchange for a measure of independence and a charter to serve as the country's international exchange bank. Chang's interest was the development of the country, particularly railroad and other infrastructure development, even if such projects were not particularly profitable for the bank.


In March 1935, H.H. Kung staged a coup against the Bank of China and Bank of Communications, forcing both to create new shares to allow the government to take a controlling share financed by overvalued government bonds. Chang Kia-ngau was removed as general manager of the Bank of China and was offered a lesser role with the Central Bank. He declined the offer, but in December 1935, accepted the position of Minister of Railways.

During much of the Sino-Japanese War, Chang served as Minister of Communications, accompanying the central government from Nanking to Chungking. After mid-1943, he was frequently in the U.S. promoting aid to the Republic of China and negotiation post-war arrangements, including aviation right. He wrote a book on railroad development which was published in the U.S. at a time when interest in China was high. After the War, he was appointed Economic Commissioner for Manchuria, and his diaries from this period were also published in the U.S.

After his departure from China, Chang moved to the US and was a senior research fellow at the Hoover Institution at Stanford University. He died on October 13, 1979 in Palo Alto, California. His wife, Chang Pihya, died in Palo Alto on May 17, 1997.

[Reprinted from Wikipedia]
Posted by Michael at 1:36 PM No comments: 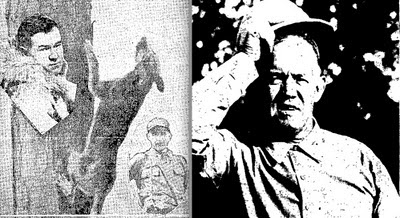 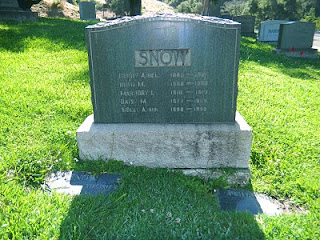 This past week I spent some time at the Cultural Heritage Survey Office in the city's Planning Department preparing for today's Oakland Heritage Alliance walking tour. The tour, called "Lake Merritt's West Side Story," starts at 11 a.m. in front of the historic Municipal Boathouse, now home to the Lake Chalet Seafood Bar & Grill, at 1520 Lakeside Drive.

I have learned that whenever I look through the survey files, I should expect to find out more fascinating things about Oakland; this time was no exception.

Little Snow Park, next to Harrison Street and facing Lakeside Drive, has an interesting story to tell. According to the files, Henry Snow was a hunter of African big-game animals in the early 1920s. He wished to donate his collection of animals to the city, provided that a suitable museum could be built to show off the collection.

The mayor at the time, John Davie, was eager to accept the donation, thinking a natural-history museum would complement other cultural institutions, such as the city's Fine Arts Gallery and the newly opened Public Museum, which was located nearby in a Victorian-style mansion that overlooked Lake Merritt and was converted from what had been a private residence.

Davie's predecessor, William Mott, Oakland's mayor from 1905-15, was responsible for opening the Public Museum. Museums, galleries and other civic improvements were part of the so-called Progressive Era agenda prevalent in many communities like Oakland in the early 20th century, the files state.

Oakland voters approved bond measures during that time to pay for the improvements, which included building a new city hall, an auditorium/arena and boulevards around the lake. A state-of-the-art water pumping station — today's Lake Chalet restaurant — to be used in firefighting emergencies also was constructed.

Mott's administration purchased the lakeside mansion and other grand homes such as the deFremery estate in West Oakland — subsequently converted into a public park — and the Mosswood estate on Broadway — it too became a park.

When Snow was ready to turn over his collection, the city had another vacant residence to offer him. It was to be a temporary location, files say, until a proper facility could be built. The home in question belonged to the late Francis Cutting, who had made his fortune in the canning industry during the late 19th century.

An East Coast native, Cutting came to California during the Gold Rush, and brought with him knowledge about new technology that preserved and packaged foods so they could be stored at room temperature without losing nutrient value or flavor.

This proved to be a big advance in the processing of fruits and vegetables. Oakland, with its strategic location close to rail, road and water, was a convenient place to establish canning companies. Cutting's company eventually would grow and merge with others; today's Del Monte Corporation is the modern conglomerate with roots back to that era.

After Cutting's death in 1913, his heirs inherited his estate and later sold it to the city. File photos of the Cutting home, erected in 1903 and facing Alice and 19th streets, show it resembled a rustic hunting lodge. The plot maps show back garden acreage running to the lake's shoreline; a separate boat house stands nearby.

At the time Cutting lived in his home, Lakeside Drive did not yet exist along that side of Lake Merritt. He, like other well-to-do lakefront dwellers of that era, enjoyed special access to the water.

In 1922, Snow, with the help of his son and daughter, moved in, transforming the place into "a taxidermic menagerie of elephants, bears, leopards, lions, snakes and birds," according to an article in a survey newsletter. A small enclosure was created next to the building to house live animals.

Unfortunately, Davie could not keep his promise to the Snow family to build a proper institution. Snow died in 1927. Son Sydney and daughter Nadine kept his legacy alive, relocating and expanding the zoo to the hills and keeping the specimens in the house available for countless school field trip visitors well into the 1950s, files tell us.

The old home was torn down in the 1960s, and for a time it appeared that a large convention-type hotel would be built there. Open space advocates protested, and it has, thankfully, remained a park.

As I continued my review of the files on Snow Park, I did come across something I was unaware of. Very early maps show the area now listed as the park was one of Oakland's early cemeteries. I checked my copy of Beth Bagwell's "Oakland: The Story of a City," and sure enough, as the town grew in the 1850s, the need to find a more remote location for the dead became ever more pressing. Today's Mountain View Cemetery, which opened in 1864, became the solution.

It does seem, file notes speculate, that because of all the early rush to build, some graves may not have been properly emptied. That did give me pause.

Find out more about Lake Merritt's fascinating history. Details about today's tour are at www.oaklandheritage.org. Copies of Bagwell's history of Oakland are available at the Oakland History Room in the Main Library, and I recommend it to all who want to learn about our history.
Posted by Michael at 1:08 PM 1 comment: