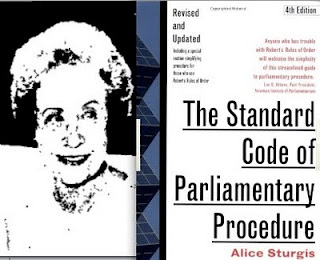 Alice Fleenor Sturgis was the author of "The Standard Code of Parliamentary Procedure" and considered one of the leading parliamentarians of her time.

Sturgis was born in Ukiah, California. She received her bachelor's degree from the University of California at Berkeley and her master's degree from Stanford University. In 1918 she traveled to France to work for the Red Cross during World War I. While in France, she married Eugene Sturgis, a law student that she met at Stanford. He went on to serve as an Oakland City Commissioner (councilman), City Attorney and City Clerk. He outlived her by two years.

Alice Sturgis' first book on parliamentary procedure was published in 1925. Sturgis became much in demand for her expertise on parliamentary issues and her book became a serious challenger to the standard Roberts Rules of Order which was written in 1876. Many organizations used her book instead of Roberts, including the American Bar Association, American Medical Association, American Dental Association and the United Automobile Workers Union. In 1951, she was awarded a Guggenheim Fellowship to write a book for college professors on how to teach parliamentary law.

Sturgis was active in women's issues, particularly issues related to women veterans. She was also the founding president of the Women's Athletic Club. 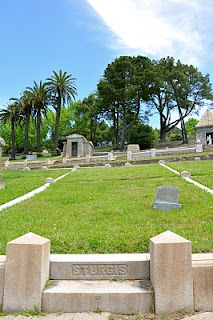 [Photo of Fleenor-Sturgis plot by Michael Colbruno]
I can be contacted at michael.colbruno@gmail.com
Posted by Michael at 9:56 PM No comments: