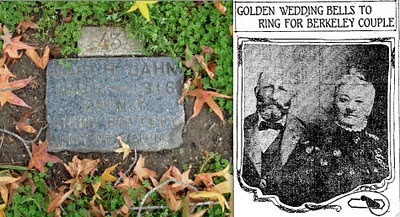 Captain Herman Jahn was born in Niedersachsen, Germany on April 11, 1836. Shortly after arriving in the United States two important things happened in his life. He met Anne Riecken and shortly thereafter married her. But Jahn had also answered President Abraham Lincoln’s call for volunteers to fight for the Union Army and left for battle after a three day honeymoon.

Jahn enlisted with the 2nd Battery, New York Light Artillery and fought at Chancellorsville. Virginia in 1863. He fought under General Joseph Hooker who was battling against Confederate General Robert E. Lee and Major General Thomas J. Jackson. The Confederate Army won the battle, which many historians consider to be Lee’s greatest battle victory.

He moved to Stockton, California in 1876 from his home in Hoboken, New Jersey, but ended up settling in San Francisco and then Berkeley. He worked for twelve years as a foreman at Mare Island in Vallejo, California. Along with his wife he ended up running a costume company, which furnished outfits and decorations for many Bay Area events and theaters, including the opera house in San Francisco.

Posted by Michael at 6:59 PM No comments: