John Oliver Halstead Watkins was born in Mendham, New Jersey on April 28, 1847 to John and Phoebe Pitney Watkins. On January 19, 1873, he married Amelia Augusta Pinney, with whom he had two daughters. His wife died in 1921.

His father was killed in the Burnside Expedition of the Civil War at age 39 in New Bern, North Carolina on December 13, 1864, which the Union Army had taken from the Confederates two years earlier. His brother died in the Battle of Williamsburg under General George McClellan. There were 2,283 Union casualties and 1,682 Confederate casualties.

Watkins enlisted with Company B of the 37th New Jersey Volunteers at the age of 15 against the protestations of his mother, who had already lost her husband and other son. The regiment was under the command of Colonel Burd Grubb and contained more than 700 men. They were put to work unloading supply trains near the Appomattox River. They were later asked to lend support on the front lines at the Siege of Petersburg where 37 members of the regiment were killed.

At the time of his death in 1937, there were only 18 Civil War veterans remaining in Alameda County. His grave remained unmarked until April 28, 2013, when two chapters of the Sons of the Union Veterans, Wright Camp 22 and Pleasanton Camp 24, obtained a marker from the United States government and held a ceremony at Mountain View Cemetery.

Watkins came to California after traveling around Cape Horn aboard the City of New York in 1867. The voyage took 150 days. Upon his arrival, he was appointed to a position in the paymaster's office at Mare Island, where he remained employed for 33 years. He also owned a strip of land in Oakland extending from Piedmont Avenue to Moss Avenue.

His uncle Reverend Isaac Brayton, was a prominent Oaklander, who ran the Brayton School and sold 200 acres to the trustees of Oakland’s newly formed Mountain View Cemetery. Watkins was also the cousin of United States Supreme Court Justice Mahlon Pitney on his mother's side of the family. Pitney authored the majority opinion in New York Central Railroad Co. v. White, which upheld a New York state workman's compensation law and laid the foundation for the expansion of these programs nationwide.

Watkins' health began to fail a year before his death after he fractured his arm in a fall from a street car. The injury was so severe it necessitated his arm being amputated. He was bedridden until his death. His funeral services were led by the Grand Army of the Republic and the Daughters of Union Veterans of the Civil War.

"LIves of the Dead" is now a book. 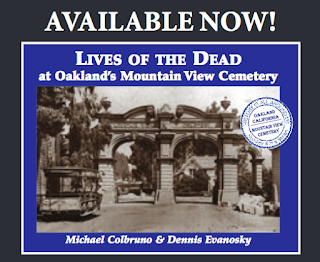 In celebration of the150th anniversary of Oakland's Mountain View Cemetery, the Alameda Sun press has released a book version of "Lives of the Dead." The book was co-authored by noted historian Dennis Evanosky and Michael Colbruno, the "Lives of the Dead" blogger. Both men are also docents at the cemetery and lead regular tours.

The book covers many of the noteworthy people interred at Mountain View Cemetery, including stories about the cemetery founders, early Oaklanders of note, famous photographers, notable African-Americans, famous pioneers in various fields and a field guide to many of their homes.

You can order online at http://alamedasun.com/bookstore or send a check for $30 made out to Alameda Sun to 3215J Encinal Ave. Alameda CA 94501
Posted by Michael at 5:03 PM No comments:


One of the more unusual burials at Mountain View Cemetery has to involve Dr. Ignacio Herrera y Cairo, the former Governor of Jalisco, Mexico and Grand Master of the Masonic Veteran Association of the Pacific Coast.

Dr. Ignacio Herrera y Cairo was an arch-enemy of the Catholic Church for having imprisoned a group of Carmelite friars who he maintained were plotting against the government. The Catholic Church never forgave him and Herrera feared for his life from that day on.

In 1858, a group of men showed up at his ranch and exacted their revenge. Anticipating his eventual death, Herrera asked his fellow Mason brothers that if he was ever murdered they should  preserve his heart to show that he had the heart of a man who had died for his devotion to Masonic principles.

Thirty-five years after his murder, his heart was transported from Mexico to Oakland by his sister Rosalinda Labastida de Coney and kept at the Masonic Temple. When his heart was ready for burial thousands of Masons gathered at the gates of Mountain View Cemetery and along with four Knights Rose Croix escorted his copper casket, draped in the Mexican flag, to its final resting place. The casket with the heart was placed beneath a granite monument where Rosalinda ensured that all of his final wishes were properly honored. The Masonic Choir sang the "Martyr's Hymn" and Edwin Sherman delivered a eulogy that blasted the Catholic Church and charged them with his murder.

When she died in 1897, Masons turned out in droves for her funeral, with each person placing a red rose on her grave. Her foster son, the acclaimed artist Xavier Martinez designed the plaque that graces her grave.