Constable Gustave Adolph "Gus" Koch was one of five deputies killed as a result of a powder magazine explosion. Along with Deputy Daniel Cameron, Deputy John Lerri, Deputy Charles White, and Deputy George Woodsum the group were killed when a barricaded murder suspect deliberately set off an explosion.

The suspect was an employee of the Western Fuse and Explosives Company and had murdered a coworker during a dispute over a 25 cents seven spot Chinese lottery ticket (known as Keno today) and $48 in winnings.

The suspect fled into the powder keg, which contained 5-tons of powder, and threatened to blow it up if anyone attempted to arrest him. The standoff continued overnight and into the morning until the suspect called to Deputy White and told him he was ready to come out. As the other deputies approached the magazine it suddenly exploded, killing the five deputies, a female bystander, the suspect, and seriously injuring two other deputies. 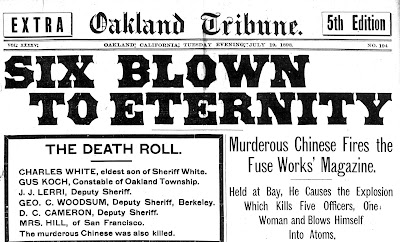 The Western Fuse and Explosives Company was completely destroyed along with more than two dozen nearby homes and businesses. Windows were broken out miles away and the blast was felt as far south as San Jose, where residents believed an earthquake had occurred. The suspect's body had to be recovered in bits and pieces.

Koch was born in Tuolumne County in 1865. He never married and lived in the Temescal area of Oakland. He had been elected constable by the citizens of Oakland Township four years prior to his death. He was an avid yachtsman and was a member of the Marine Yacht Club of San Francisco. He also was a volunteer firefighter for the Temescal Volunteer Fire Department.

Koch's grave remained unmarked until the Alameda County Heroes Grave Project erected a monument and plaque in his honor.

To learn more about the Alameda County Heroes Grave Project visit their website at ACHGP.org
Posted by Michael at 9:22 PM No comments: