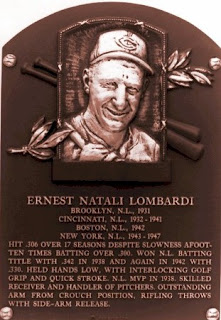 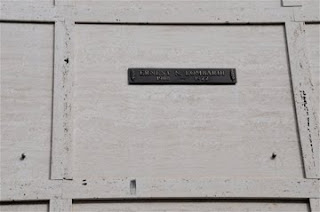 Ernesto Natali "Ernie" Lombardi was born on April 6, 1908 in Oakland, California. Lombardi was a Major League Baseball catcher for the Brooklyn Robins, the Cincinnati Reds, the Boston Braves and the New York Giants during a Hall of Fame career that spanned 17 years, from 1931 to 1947. He had several nicknames, including "Schnozz", "Lumbago", "Bocci", "The Cyrano of the Iron Mask" and "Lom". Bill James called him "the slowest man to ever play major league baseball well." He is listed at 6'3" and 230 lbs, but he probably approached 300 lbs towards the end of his career. He was also known as a gentle giant and this made him hugely popular among Cincinnati fans.

Ernie Lombardi started his professional baseball career for his hometown Oakland Oaks of the Pacific Coast League. He hit well (over .350 with power in 1929 and 1930) and had a strong arm. His talents were soon noticed by the Brooklyn Dodgers who purchased his contract for $50,000. Lombardi played his rookie season for the Robins in 1931 and played well (batting .297). Brooklyn had too many quality catchers at the time and Robins manager Wilbert Robinson contemplated using the strong-armed Lombardi as a pitcher. He was traded to the Cincinnati Reds shortly before the start of spring training for the 1932 season. Lombardi flourished his first year in Cincinnati, batting .303 with 11 home runs and 68 runs batted in. He became a national star in 1938 when he hit a league-leading .342 with 19 home runs, drove in 95 runs, and won the National League's MVP award. Ernie Lombardi became one of the Reds' most productive and popular players. He also has the distinction of catching both of Reds left-hander Johnny Vander Meer's back-to-back no-hitters, accomplished on June 11 and June 15, 1938. Vander Meer's feat has never been matched. Lombardi's hitting skills and leadership helped the Reds to the National League pennant in 1939 and 1940, and the World Series title in 1940.

In 1942, the Boston Braves purchased Lombardi's contract, despite his leading the league in hitting that season with a .330 batting average (albeit, in only 309 at-bats); the next batting title to be won by a catcher came more than 60 years later when Joe Mauer won the AL batting title in 2006, a testament to how difficult it is for a catcher to win the title. Lombardi remains only one of two NL catchers ever to win a batting title. Boston opted to trade him to the New York Giants after the season. He enjoyed three productive if unspectacular seasons with the Giants before seeing his playing time diminish over the next two seasons. He retired after the 1947 season, having compiled a .306 career batting average, 190 home runs, 990 RBI, 601 runs and 430 walks.

The six foot, three inch, 230-pound Ernie Lombardi was legendarily slow-footed, and during the course of his career he grounded into 261 double plays. Aside from being the yearly leader in grounding into double plays on 4 occasions, he holds the record for grounding into one every 25.3 plate appearances. An opposing manager once jokingly said that Lombardi was so slow, he ran like he was carrying a piano — and the man who was tuning it. Defenses would often position all four infielders in the outfield when Lombardi came to the plate. Despite this, he became an outstanding catcher on the basis of his strong, accurate arm and his ability to "call" a game.

During the fourth game of the 1939 World Series, in the tenth inning of a tie, Joe Dimaggio singled and Reds outfielder Ival Goodman fumbled the ball. Yankees right fielder Charlie "King Kong" Keller, who was well-known for his sturdy physique, beat the throw to catcher Lombardi and the resulting collision knocked "The Schnozz" flat on his back. Dimaggio raced around the bags and scored while Lombardi was out cold, the ball a few feet away on the ground. The press was hugely critical of the sensitive catcher because of this and it came to be known as "Lombardi's Big Snooze". Bill James, in his Historical Baseball Abstract, says that "Lombardi was now the Bill Buckner of the 1930s, even more innocent than Buckner, and Buckner has plenty of people who should be holding up their hands to share his disgrace."

In 2004, The Cincinnati Reds dedicated a bronze statue of Lombardi at the entrance of Great American Ball Park. He was honored along with three other Crosley Field Era Reds: Joe Nuxhall, Ted Kluszewski and Frank Robinson.

While Lombardi played for the Reds as the starting catcher, teammate and backup catcher Willard Hershberger became the only major league player to commit suicide during a season. Hershberger oddly enough told manager Bill McKechnie that "my father killed himself, and I'm going to do it, too!" After failing to appear at the stadium the next day the Reds checked Hershberger's room at the hotel only to find that he had slit his throat and wrist.

A sad footnote to the Hershberger suicide was Lombardi's eerily similar suicide attempt in 1953. Lombardi had been battling depression for some time and agreed to go to a sanitorium at his wife's urging. While staying overnight at a relative en route to the facility, Ernie slit his throat from ear to ear with a razor and begged not to be saved. Papers described him as "clinging to life" but he made a full recovery.