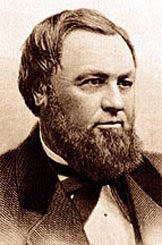 [Photo of Merritt family mausoleum, in foreground, by Michael Colbruno] 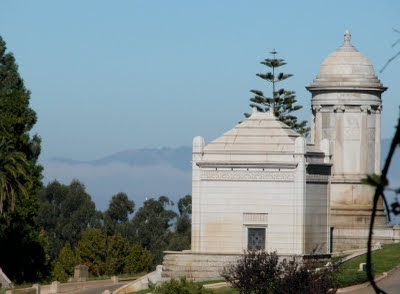 As a young physician in Plymouth, Massachusetts, Merritt attracted the attention of Daniel Webster when he successfully performed a difficult operation on Webster’s neighbor. Webster encouraged him to come to California, saying, “Go out there, young man. Go out there and behave yourself, and free as you are from family cares, you will never regret it.” Webster gave him letters of introduction to friends in California, Merritt bought a ship of 140 tons, loaded it with general cargo, and set sail from New York for California at the end of November in 1849.

His arrival on May 5, 1850, was at an auspicious time, as one of San Francisco’s frequent “great fires” had occurred the previous day, allowing him to make a considerable profit on the goods he had in his hold. With these funds he chartered a brig for $800 a month and put it in the profitable Humboldt Bay - San Francisco lumber trade run.

While practicing medicine in San Francisco he increased his involvement in the lumber trade by expanding to Puget Sound. In 1852 he started buying and selling real estate in San Francisco and Oakland with great success. The first year he made $100,000 in San Francisco real estate alone. That same year he bought large acreage along the shores of what is now Lake Merritt for the total price of $6,000. He subdivided this land and built and sold several “elegant” homes in the area of Jackson, Lake, Oak, and Madison Streets. In 1853 he traveled east to order the building of the first two barks to be built expressly for the coast lumber trade -- in this case, San Francisco to Portland.

Merritt served as a member of the Vigilance Committee of 1856, was a San Francisco supervisor, and although he declined to serve as San Francisco’s mayor in 1858, did fill that position in Oakland in 1868. That same year he was named a Regent of U.C. by Gov. Henry Huntly Haight. Merritt was a founder of the Oakland Bank of Savings and the California Insurance Company. In 1888 Robert Louis Stevenson chartered Merritt’s yacht Casco for his famous trip to the South Seas.

Merritt became embroiled in a scandal when the Board of Regents, instead of hiring a supervising architect, put him in charge of overseeing the construction of the campus’s second building, North Hall, which they were anxious to have completed in record time. The State Assembly investigated charges that Merritt and some friends in the building industry had taken advantage of his unusual authority, that Merritt had profited financially in the venture, and that the University had acquired a building of inferior quality at an exorbitant cost. The Committee determined that the building cost $24,000 more than it was worth. Merritt immediately resigned from the Board of Regents and refunded the University his lumber yard’s profits of $867.

One contemporary account describes Merritt as “6’3” and weighing 340 pounds when at his best.” It is small wonder that this admired specimen of Victorian manhood (great girth was considered manly) developed diabetes which complicated a case of uremic poisoning, causing his death.

The plaque on the huge granite tomb reads: “Physician, shipmaster, philanthropist, Regent of the University of California, mayor of Oakland, founder of Samuel Merritt Hospital.”
Posted by Michael at 1:18 PM