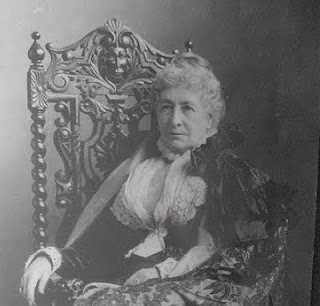 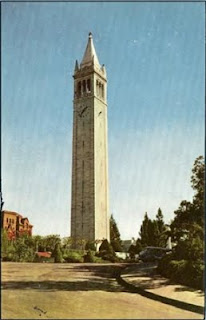 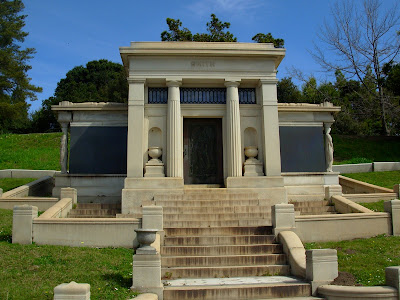 Jane Sather was the second wife of San Francisco banker, Peder Sather (1810-1886). Norwegian-born Peder Sather came to California in 1850 from Philadelphia, and organized the banking firm of Sather and Church, later absorbed into the Bank of California. He was one of the trustees of the College of California, forerunner of the University of California.

Brooklyn-born Jane Krom knew Peder and his first wife, and after her first husband died in 1880, and Sather’s wife died in 1881, Jane and Peder were married in Oakland in 1882. When he died, just four years later in 1886, Peder Sather left Jane a considerable share of his fortune, as well as the responsibility of managing it - a duty she found onerous.

In 1899, the University of California found a new, young president, Benjamin Ide Wheeler, who came from Cornell. Mrs. Sather admired Wheeler, and discovered in 1900 that she could turn over her problems of money management to the University in exchange for a handsome income for the rest of her life, and at her death the University would receive the remainder of her estate. These days such an arrangement is popularly known as a Charitable Remainder Trust. The idea appealed to Jane Sather, and she entered into the agreement with the University. At the same time, President Wheeler had another wealthy lady who made gift after magnificent gift -- Phoebe Apperson Hearst.

During her lifetime, Jane Sather provided funding for the construction of Sather Gate as a memorial to her husband. The project was completed in 1910 and was decorated with eight marble panels, mounted on granite columns, each panel containing a nude figure, four female and four male. The figures represented the arts and sciences. Once the gate was completed some unknown rowdies decided to have a little fun and decorated the panels with oak leaves.

Jane Sather did not take kindly to such behavior, and fired off a letter to the secretary of the Regents. The panels were duly removed, and for seventy years Sather Gate stood without them, until they were restored in the 1970’s. It was not, however, prudery which moved Mrs. Sather’s response. It was rather the offensive behavior of the college students. Here is a portion of her letter of February 1, 1910:

“There is a difference in nude and naked. The latter, I should say, has not even a fig leaf and is rather trying to uncultivated people. The University students are and will always be largely of this class. Now, I ask, is it wise to subject the beautiful...to danger of defacement and probably mutilation? ..... The whole matter had passed out of my hands and is now up to the University. If they cannot protect it, it is a great pity to have built it. The next manifestation of disapproval may be a coat of green paint. Nothing will surprise me, though I did not expect the attack to come so soon.”

By her will, Mrs. Sather left the funds to build the Campanile (Sather Tower), which was completed in 1914. The idea of a bell tower on the campus appealed to her as a reminder of the sounds of her youth when she could hear the bells at Wall Street’s Trinity Church across the water from her childhood home in Brooklyn.

Peder Sather was buried at Laurel Hill Cemetery in San Francisco, and his body was moved to the special Laurel Hill section in Colma’s Cypress Lawn when all the cemeteries were removed from San Francisco. Jane Sather was buried in the “Borax” Smith mausoleum as that the Smiths were friends of hers. Mary R. Smith, Borax Smith’s first wife, had died in 1905 after which he had the mausoleum built. Borax Smith, so to speak, invited Jane in. There are some dozen relatives and friends buried there.

Not everyone was pleased with Jane Sather’s huge gifts to the University of California. While Jane was childless, Peder Sather had grandchildren, one of whom apparently felt he should have received more of the estate. He once remarked that Jane was an adventuress who had picked up his grandfather on a ferryboat!

[Biography courtesy of Barbara Smith and the Mountain View Cemetery docent program]
Posted by Michael at 11:53 AM