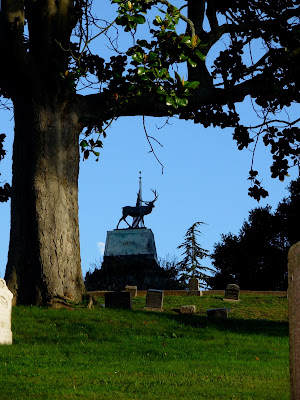 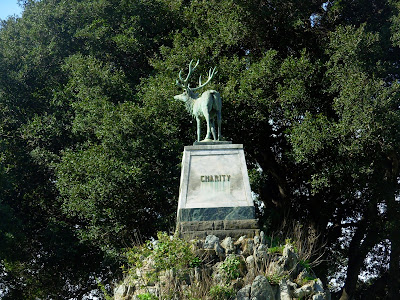 One of the most iconic structures at Mountain View Cemetery is the big, bronze elk that sits atop a tumulus in Plot 32. The elk was commissioned by the Oakland Lodge Number 171 of Elks to mark their burial blot at the cemetery. It was completed in 1896.

The elk was modeled after an actual animal in San Francisco’s Golden Gate Park known as “Father Elk” who had been moved to the park from the wild. The sculptor was Frank Hapersberger and the cast was completed at the Whyte & De Rome Foundry in Oakland.

The burial plot where the elk stands is known as “Elks Rest.” It is the common term for Elks burial plots and they exist in almost every state. The tumulus is built of what is probably serpentinite, a local metamorphic rock that is unfriendly to plants.

Since its founding in 1868, the Benevolent and Protective Order of Elks (BPOE) has used the elk as a symbol of the Order. Although the elk was adopted as their symbol by just one vote over the buffalo, it was chosen because it is a peaceful animal that will rise in defense of its own in the face of a threat, as well as being fleet of foot and keen of perception.

The cardinal principles of the Elks are "Charity, Justice, Brotherly Love and Fidelity." You can find these engraved in huge letters on the base where the elk stands.