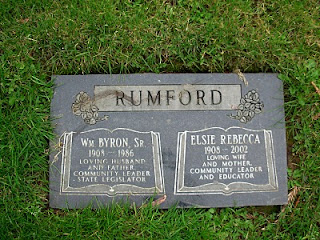 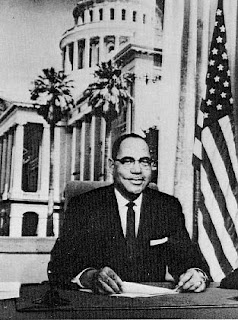 Born in Courtland, Arizona, William Byron Rumford, Sr. earned his pharmacy degree in 1931 and master’s degree in public administration in 1959 at the University of California at Berkeley.

He was elected to the California State Assembly in 1948, representing the heavily African-American and Democratic constituencies of Alameda County, Berkeley, and part of Oakland. Rumford, an ally of Congressman Augustus Hawkins who preceded him in the State Assembly, served eight consecutive terms as 17th District Assemblyman until 1966.

At the height of his career in the mid-1960s he was considered a possible replacement for one of the state’s ailing U.S. senators, largely because of his ties to liberal Democratic Governor Edmund G. “Pat” Brown.

Today Rumford is best remembered for three pieces of legislation: the California Fair Employment Practices Act of 1959; the Good Samaritan Act of 1959 which garnered national attention; and the law that bore his name, the Rumford Fair Housing Act of 1963, which failed to survive a referendum challenge but was upheld by the U.S. Supreme Court.

In 1966 Rumford was defeated in an attempt to win a California State Senate seat against Republican Lewis S. Sherman of Berkeley. The election was disputes because of oddities with the ballots, uncounted ballots and altered ballots. After the election scandal, Caspar Weinberger, who was then Chairman of the Federal Trade Commission, invited Rumford to Washington D.C. to help him with the commission's work protecting consumers. When he was defeated in the Democratic Primary in an attempt to regain his old Assembly seat, Rumford retired from politics.