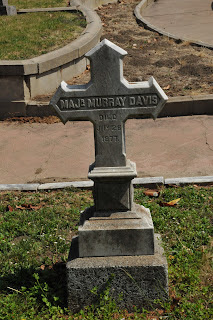 Captain Murray Davis (18??-1877) was a member of the 8th United States Cavalry, Company A. Along with Lieutenant John Lafferty, his second in command, he established Camp Winfield Scott, on December 12, 1866 in Paradise Valley. The camp was created to protect travelers and settlers from the Native Americans, who were feuding with new arrivals. The camp was abandoned in February 1871.

This is from a June 1867 Secretary of War report:
On the 17th of January, 1867, in accordance with post orders issued by Captain Murray Davis, at Camp Winfield Scott, Nevada, Second Lieutenant John Lafferty, Sergeants J. Kelley and Edward Flanigan, and twelve privates of the eighth United States cavalry, started on a scout after Indians. On the 18th two Indians were killed and a rancheria and some provisions destroyed. On the 21st the command returned to Camp Scott. During the expedition severe storms of snow and rain were encountered and much suffering endured by the men, the cold being extreme. Sargeant Kelley was wounded in the hand by and arrow. Lieutenant Lafferty and the non-commissioned officers and men of his detachment are much commended by Captain Davis for their energy and perseverance, and for the faithful manner in which they carried out the instructions given them.

There are also records of a Captain Murray Davis who was involved in the investigation of the treatment of former slaves after their emancipation following the Civil War. I have not been able to confirm if he is the same person who was at Camp Scott.
Posted by Michael at 7:19 AM

Hello Michael
I am doing some family history. My GG Grandfather lived in Paradise Valley from 1864 until 1898, his name was Mark Haviland. I found numerous newpaper articles about the US Cavalry at Camp Scott (Camp Winfield Scott). My GG Grandfather advertised his ranch as Camp Scott. I am searching the National Archives for letters/reports between the field commanders at Camp Scott and Major Charles McDermit at Fort Churchill. If I find anything I could notify you.