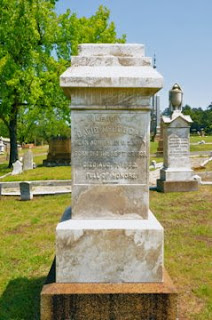 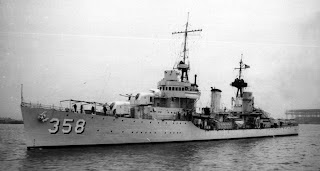 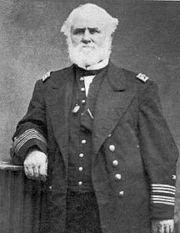 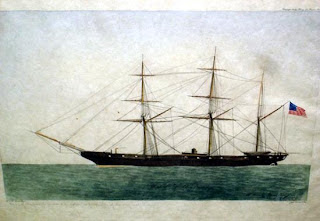 [Gravestone photo by Michael Colbruno; the USS McDougal; portrait of McDougal; the Wyoming]

Rear Admiral David Stockton McDougal (1809-1882) was born in Ohio and was an officer in the United States Navy during the period of the American Civil War.

In 1828, he was appointed midshipman and over the next three decades he served in the Mediterranean, West Indies and Home Squadrons, as well on the Great Lakes in Michigan. He commanded three ships, the Warren (1854-56), John Hancock (1856) and the Wyoming (1862-64).

His greatest accomplishments occurred while commandeering the Wyoming, as he protected American merchant ships from pirates and Confederate raiders. In 1862, the Wyoming under McDougal’s command, joined the hunt for the elusive CSS Alabama in the western Pacific. Although he allegedly came within 25 miles of the Alabama, he never caught up with the ship. Instead, McDougal was told to head to Japan.

On July, 16, 1863, during the naval battle of Shimonoseki, the Wyoming boldly entered the Straits of Shimoneseki to engage shore batteries and three ships of Prince Mori, clan chieftain of the Choshu. During the 75 minute battle, McDougal sank one ship, heavily damaged the other two, and pounded shore guns. This victory protected American treaty rights in the western Pacific.

Many historians assert that this was one of the greatest naval victories in our history, despite being largely forgotten today. McDougal, for all of his efforts, received no promotion and not even contemporary fame among his countrymen, as 1863 was a crucial year of the Civil War, and his exploits in far-away Japan were lost in bloody battles raging at home. As Theodore Roosevelt once said of this fight, "Had that action taken place at any other time than during the Civil War, its fame would have echoed all over the world."

He died on August 7, 1882 in San Francisco and two ships have been named the USS McDougal in his honor.

If you're a Civil War buff, check out the blog at http://www.brettschulte.net/CWBlog/.

Subscribe to Michael Colbruno's Mountain View Cemetery Bio Tour by Email
Posted by Michael at 8:54 AM