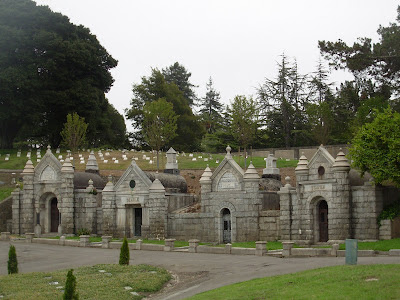 If you take a walk with anyone through Mountain View Cemetery they will undoubtedly ask about these stunning family mausoleums. I have provided biographies below (and answered the frequent question, “Are Powell Street and Stanyan Street named after these guys?). As an introduction, here is a description of the structures from Douglas Keister’s wonderful book “Going Out in Style.”

Herman Althof (1830-1907) was born in Westphalia, Germany and moved to California as an infant. He was one of the owners of the Althof & Bahls bookbinding company in San Francisco. His sister was Elizabeth Bahls.

Abraham Powell (1828-1895) was born in Philadelphia, Pennsylvania. As a youth he was employed in the Philadelphia Navy Yard and learned the trade of ship-joiner and civil engineer. He made numerous sea journeys in his youth, traveling to the West Indies and Europe.

In 1849, Powell joined the rush to California and boarded the ship "Oseola" in Philaelphia with sixty-four of his fellow pioneers. The ship went around Cape Horn and arrived in San Francisco on August 5, 1849. Upon arrival Powell entered into partnership with a fellow traveler as builders and joiners. Together they constructed numerous houses and buildings around San Francisco.

In 1850, Powell returned to Philadelphia. He was appointed Master Joiner at the Mare Island Navy Yard in 1854. Until 1858 Powell had full control of the yard operations on the Island. He was also Naval Constructor during this period, but continued as Master Joiner down to 1864. In 1865 Powell entered into the private sector and became general manager of the Puget Sound Lumber Company. He first established a retail yard in Vallejo and then extended his operations by building yards in Napa, Suisun, Colusa, and in Yola County. He also owned a redwood mill at Stuarts Point in Sonoma County.

Powell was active in the Masonic Order, both in Philadelphia and California. He served as Mayor of Vallejo for eight years and was a member of the Solano County Board of Supervisors.

Powell Street in San Francisco is not named for this Powell family. It is named for Dr. William J. Powell, a surgeon who established a sanatorium for sick soldiers.

Charles H. Stanyan (1831-1889) was a San Francisco County Supervisor from 1866-1869 and served as one of the first San Francisco Park Commissioners. His major accomplishment in office was helping the city acquire the land on the east side of Golden Gate Park, which is why Stanyan Street is named after him.

The Stanyan family residence at 2006 Bush Street built in 1854 is a San Francisco Historic Landmark. Many prefabricated houses were shipped to San Francisco from New England during the Gold Rush era, but Stanyan's "Boston House" is one of the few that have been positively identified as having been shipped around the treacherous Cape Horn.
Posted by Michael at 9:56 PM