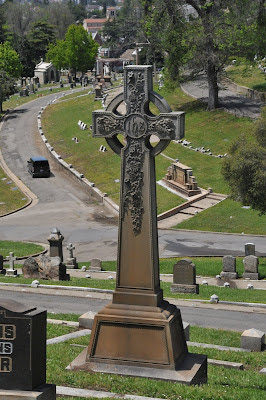 Robert Watt (1832-1907) was a native of Scotland who arrived in California in 1851 where he amassed a fortune in mining.

Watt was also a political and business figure of note. He served as California’s State Bank Commissioner and State Controller (1867-1871), but retired from politics in the 1870s.

He became one of the prime promoters of the San Joaquin Valley Railroad, which later became the Atchison, Topeka & Sante Fe Railway Company. He was president of the drug firm Langley & Michaels at the time of his death. He also served as vice-president and director of the Union Trust Company, director of the San Francisco Savings Union and a director of the Wells Fargo Nevada National Bank.

Watt was riding in a carriage with his wife in San Francisco when a Sutter Street street car hit them. Their carriage was flipped completely around, tossed over the curb and shattered to pieces. Although he survived the accident he died of heart failure five months later.

Subscribe to Michael Colbruno's Mountain View Cemetery Bio Tour by Email
Posted by Michael at 11:32 AM