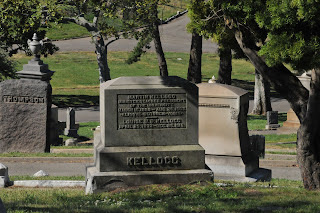 Martin Kellogg was born in Vernon Connecticut on March 15, 1828. He entered Yale College in 1843, graduating as valedictorian of his class in 1850. After graduation, he studied theology at the Union Theological Seminary in New York.

In 1855, he moved to California to work as a home missionary and was subsequently appointed professor of Latin at the College of California. After the school’s merger with the University of California in 1868 he became one of the first professors of the institution along with Mountain View Cemetery denizen and Sierra Club founder John Le Conte.

Like his father, Rev. Ebenezer Kellogg, who taught ancient languages for thirty years at Williams college, the younger Kellogg served as chair of the department of ancient languages until 1874 and dean of the faculties of letters and sciences from 1870-1885.

From 1886 to 1889, he served as president of the University of California. According to Charles Wollenberg's "Berkeley: A City in History," Kellogg's tenure as President was successful:

"The presidency of Martin Kellogg finally brought some administrative stability to the institution. A veteran English professor who had long been active in Berkeley civic affairs, Kellogg had sufficient faculty, Regent, and community contacts to gain acceptance, if not always support. The university also benefited from the educational demands of the nation's emerging industrial economy. In Gold Rush California, for example, mining had been an individual adventure, and most miners were untrained amateurs. By the 1890s, mining had become a major corporate that needed university-trained engineers, geologists and managers...The legislature passed a statewide property tax of one-cent per thousand dollars assessed valuation for university funding, and enrollment began climbing - from slightly more than 200 in the early 1880s to nearly 2000 in 1900."

He died in the Waldeck Sanitarium in San Francisco as a result of complications from surgery to relieve a stomach and liver ailment.