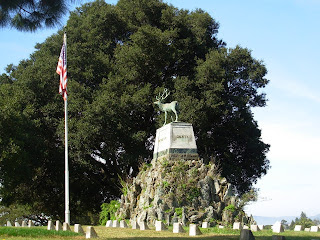 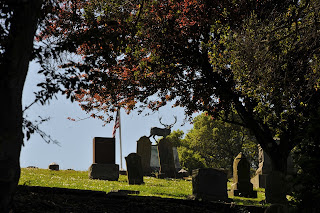 This columbarium, in the form of a Grotto, (a cave-like structure)...It is the centerpiece of the Elks plot...It's hard to put a label on this particular style, so we're just going to call it Naturalistic. This unique columbarium, reminiscent of megalith and tumulus styles of neolithic times, was built by the Oakland, California Elks Lodge to house the ashes of departed Elks and their wives. The columbarium which was once covered with ivy is constructed of individual rocks cemented together. The Elks columbarium is also similar to Grottos sometimes seen in Catholic cemeteries. These grottos are reputed to be a good place to go for sightings of the Virgin Mary. A full size bronze elk tops the mountain and brays skyward perhaps signaling the Gods of the Earthly loss and the Heavenly gain of another member of the fraternal order. Surrounding the columbarium are the graves of other Elks and their wives.