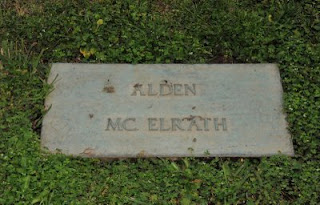 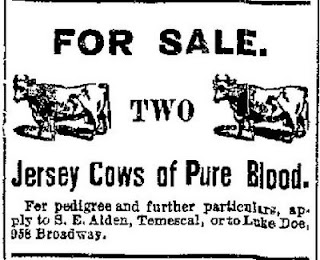 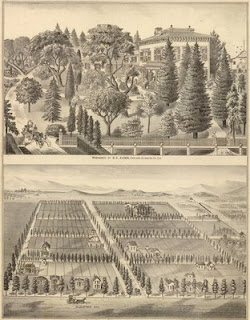 [Picture of Alden property from 1878 edition of Thompson and West; Photo of Alden grave marker by Michael Colbruno - click images to enlarge]

Solomon E. Alden was a descendant of the Pilgrims who settled in Massachusetts. He came to California in 1850, settling in Alameda County in 1852. Census tracts list his occupation as “farmer.” His only daughter married John McElrath a colonel in the Confederate Army.

According to the August 31, 1889 issue of the Oakland Daily Evening Trinity, at one time almost all of the Temescal area was owned by Solomon Alden. Alameda County records list his property at 300 acres. Friends used to come to his house to eat cherries and chat.

Note the ad above, which simply lists his address as Temescal. From 1899 to 1908 the post office in North Temescal was known as the Alden Post Office. When he died the property was turned over to his daughter, Mrs. J.E. McElrath.

That same year, the Assessor’s office listed him as the fourth wealthiest property owner in Alameda County after Edson Adams, Samuel Merritt and Frederick Delger, all of whom are buried at Mountain View Cemetery.

He also served as a Director of the Oakland Bank of Savings along with Mountain View Cemetery denizens Walter Blair and Frederick Delger.