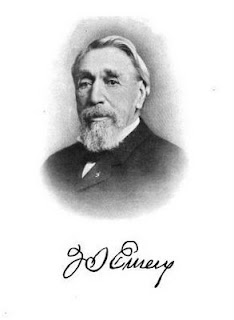 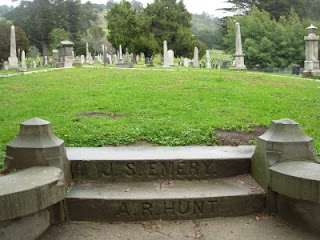 Joseph Stickney Emery was born in Pembroke, New Hampshire in 1820, whose ancestors fought in the Revolutionary War.

Emery came around the Horn to California aboard the John Marshall arriving on September 18, 1850. Unable to resist the call of the gold fields, he went to the mines in Butte County, but in 1851 returned to San Francisco hoping to find work when he heard that a fire had destroyed the city.

He was a farm boy who had learned the stonecutter’s trade during ten years he spent in Maryland and Washington, D.C. Shortly after his arrival he spent six months supervising the building of the San Francisco County Jail. That spring he developed the stone quarry on Yerba Buena Island, the first quarry from which stone was taken to San Francisco, and he later developed quarries on Angel Island. For the next several years he engaged in contracting, working on some of the major buildings of the area. He furnished most of the stone for the building of the Mare Island dry dock as well as the U. S. Mint in San Francisco.

In 1858, he moved across the Bay to Oakland. In 1859 he settled on 185 acres he had bought in Alameda County, now the site of Emeryville, and he served as a trustee of that town for a number of years. Emeryville is probably the oldest inhabited land in the East Bay, as it was home to the Costanoan Indians who left behind skeletons, artifacts and camp-refuse. He played a key role in the formation of the town as a member of the Town Board of Trustees.

His other interests included the Blue Lakes Water Company of Amador County, the Telegraph Avenue horse-car line that ran from Oakland to Berkeley, a rail line that ran from 14th & Broadway to his home and then to the Bay, the California and Nevada Narrow Gauge (Rail) Line and the Oakland Home Insurance Company (which later became Fireman’s Fund Insurance).

Perhaps his greatest achievement was supervising the dredging of the channel at the Oakland Estuary. This allowed the ferries to run regularly from Oakland to San Francisco. This accomplishment allowed for the transcontinental railroad terminus to be built in Oakland, causing the city’s rapid growth into a major California port and industrial center.

He was an original director and later president of the Mountain View Cemetery Association. Historian Dennis Evanosky points out an interesting irony about Emery's resting place, it contains no gravestone and Emery was a stone cutter.

Subscribe to Michael Colbruno's Mountain View Cemetery Bio Tour by Email
Posted by Michael at 9:11 AM