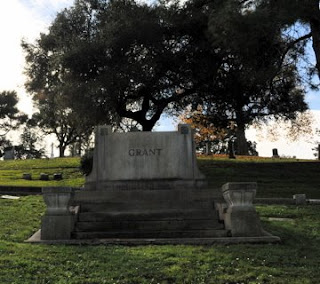 George E. Grant was born on October 23, 1823 and was a native of Lyme, New Hampshire. He was educated at Hannover, where he also got his first job as a clerk in the local store.

He married the former Ellen Louisa Daggett of Maine. He arrived in San Francisco via the Isthmus of Panama around 1850 and eventually settled in Oakland.

In 1895, Grant prevailed in a lawsuit against the city of Oakland which had tried to declare his tract of land as public property.

He died of pneumonia at his home on 1253 Third Avenue on December 3, 1904, survived by his wife and his two children, Abbie Wendt (Mrs. Charles William Wendt) and George E. Grant , Jr. Among his pallbearers, were Mountain View denizens George Pardee, Joseph Emery and Isaac Requa. Grant was the Vice President of the Mountain View Cemetery Trustees at the time of his death. Grant specifically requested that there be no music at his memorial service.