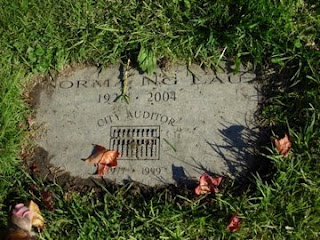 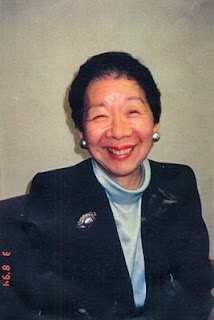 [Photo of Norma Ng Lau and obituary from the SF Chronicle; Photo of Lau gravesite by Michael Colbruno]

Norma Ng Lau was born Jan. 2, 1923, at the home of her parents, Ng Shun Kay and Alice Jung Ng of Oakland, under the sign of the goat according to the Chinese calendar. She was the oldest of four children.

As a baby, she could not drink cow's milk, so her father found a neighbor with goats, and her parents fed her goat's milk every day.

She attended Oakland's Lincoln School and later University High School, which was a feeder school for UC Berkeley. In 1944, she graduated from Cal as a member of the Phi Beta Kappa honor society. At Berkeley, she met her future husband, Chris Lau. They were married in 1944.

In addition to raising her two children in the 1950s and '60s, Ms. Lau helped her parents run a small grocery store on Oakland Avenue. While she worked behind the counter, she studied for the state's certified public accountant examination. She later also became a certified internal auditor and a certified fraud examiner.

Her political career did not start until she was 54 -- and at first it was just a whim. She was urged to run for city auditor by friends, family and co-workers. She won after a runoff.

Ms. Lau prided herself on being able to get along with everyone in Oakland's diverse political spectrum. Although she received endorsements from all factions in Oakland politics, she never publicly supported candidates.s

Her audit results of city programs sometimes made headlines.

In the 1980s, she exposed a series of bogus names on the city's payroll in the Office of Economic Development. In the early 1990s, she uncovered overpayments to health care providers and excessive, fraudulent cell phone use by city employees.

In 1998, an audit of funds to upgrade Oakland's emergency-response system revealed that $1.3 million worth of computer equipment was missing without explanation or documentation.

After her retirement, she wrote a mystery novel set in the Chinatown of Parkland, an imaginary East Bay city much like Oakland. She was editing the manuscript at the time of her death, her daughter said.

Ms. Lau was active in her profession and in her community. She was president of the local Institute of Internal Auditors and international secretary of its parent organization. In 1999, the national Association of Government Accountants recognized her for distinguished local government leadership.

A member of Business and Professional Women and board president of Citizens for Better Nursing Home Care (now known as Ombudsman Inc.), she was named a woman of achievement by the Soroptimists in 1980 and woman of the year in 1982 by the National Women's Political Caucus.

Most recently, she was a board member of Purple Silk, a program that teaches children to play Chinese music using traditional instruments in Oakland.

She died in Oakland of cancer.

Thanks for presenting such a wonderful blog devoted to Mountain View Cemetery. Your name and your site has been recommended to me for membership into the Association of Graveyard Rabbits. If you are interested in this new group of associated blogs devoted to cemetery research and study, please contact me at email: hillcountrymonroecounty@gmail.com or check out the association's blog, THE GRAVEYARD RABBIT for more information.

Thanks,
Terry Thornton
Fulton, Mississippi
for The Association of Graveyard Rabbits (www.thegraveyardrabbit.com)

I worked for Norma Lau for 23 years. She was a wonderful woman, and the City of Oakland lost a great Auditor. I miss her wisdom every day.