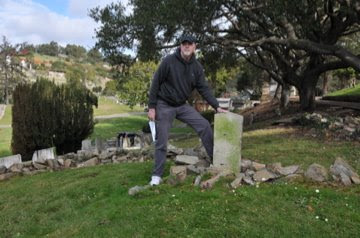 Heath was hailed as a hero in the Mexican War having served almost the entire duration of the conflict. After the war he was ordered with the U.S. forces to California where he became the quartermaster for the Pacific Division. On his voyage to California, the captain of the Cruces steamship died and Heath took the helm and completed the trip around the Horn. He arrived on February 28, 1849.

That same year, he became a member of the first California State Assembly. He also served as a pilot commissioner of the San Francisco harbor and took part in the founding of San Joaquin County.

In 1856 he was promoted to Brigadier-General of the 1st Brigade, 2nd Division, of the California Militia.. In his civilian life, he was known as the “Tobacco King” and owned a shop with a Mr. Horne.

Records also show that he was invited to attend the San Francisco Vigilance Committee of 1856, but he refused to serve.

In 1872, Heath bought a 1,500-acre property at what is now Edge Hill Vineryard in Oakville. He died here on February 6, 1875 and his body was transported to Mountain View Cemetery for burial. Tragically, his 16-year-old daughter Marbury Ewell Heath died a month after him of heart disease .

His winery was passed on to his son Richard Shelden Heath, who sold it to William Scheffler in 1879 after quickly going bankrupt.

White Barn Benefit for St. Helena Historical Society set for Nov. 9, 2014
The Heath Family Saga, a one man show with Michael Waterson, will be presented at the White Barn at 3 p.m., November 9. He will be joined by musicians Ann Gilleran, Linda Howard and Ron and Esther Brunswick.

The Heath Family owned “Edge Hill” from 1872 to 1879, renaming the winery “Heath Cellar”. General Richard W. Heath and his wife Mary lived in the Victorian home on the property. This home was built in 1855, and was replaced in 1881 by the next owner.
The program tells the history of the Heath family, father, mother, five sons and five daughters. Their property was at the end and west of Sulphur Springs Avenue, now owned by David and Nancy Garden. Michael Waterson will tell their story through the words of family friend, St. Helena poet William Whittingham Lyman Jr.(1885-1983).

Michael Waterson has performed many times at the White Barn in reviews, readings and plays, and with Kith & Kin, the traditional Irish music band formed by the late John Kelley. A retired journalist, Mike works in the tasting room of Burgess Cellars winery on Deer Park Road. He was Napa Valley Poet Laureate in 2010-11.

Tickets are $30 to benefit the St. Helena Historical Society.
For tickets and information see the website at www.thewhitebarn.org or call the box office at 707-251-8715. The White Barn is located at 2727 Sulphur Springs Ave. in St. Helena.
historical society: shstory@shstory.org