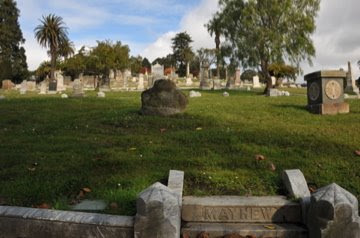 Joseph Addison “JA” Mayhew was born in Massachusetts in 1825. He served as the third sheriff of Alameda County in the 1860s. He came to California in search of gold, but after having limited success he moved to Oakland.

While in Oakland he became interested in politics and became one of the founders of the Republican Party and was chairman of the Alameda County Republican Party in 1861. He was elected county sheriff in 1861 and served until September 2, 1863. He created a furor after the Civil War when he became a Democrat.

As sheriff, Mayhew oversaw the first legal hanging in Alameda County on May 9, 1862. The criminal was Edward Bonney, who had been indicted for stabbing a man. He received a 14-day respite from Governor Leland Stanford and almost escaped from jail. The hanging took place at the San Leandro Court House Hall and was attended by 40 invited guests.

In 1862, along with the famed Rev. Thomas Starr King he raised money for the relief of sick and fallen soldiers from the Civil War.

He should not be confused with his uncle, Jonathan Mayhew (1819-1886), who was elected from the Washington District to the Alameda County Board of Supervisors in 1858. Jonathan and JA Mayhew did work together, however, operating Mayhew’s Landing in Newark, California. [Property records show the land was titled to Jonathan Mayhew]. The two men operated a fleet of bay sloops and schooners between Mayhew’s Landing and San Francisco before the advent of the railroad in the area. They also owned a lumber yard and warehouses, where they built vessels. Both men were known as “Captain Mayhew.”

JA Mayhew owned 1,500 acres of land near Newark where he raised cattle. According to his family, he built the Senator Fair House in Newark in 1858 as a home for his wife, the former Ann Frances Fisher. He was a trustee of the Alameda Presbyterian Church in Centerville, served on the Board of the Alameda Valley Railroad, was a staunch defender of the Union cause during the Civil War, served on many cattlemen and agricultural boards, as well as being a founding trustee of Mountain View Cemetery in Oakland.

Mayhew became a wealthy man but ended up losing all of his money. He died on October 24, 1901 at the Alameda County Infirmary from cirrhosis.