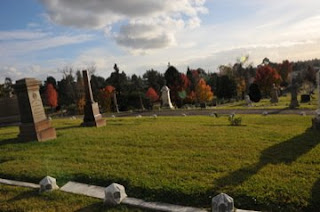 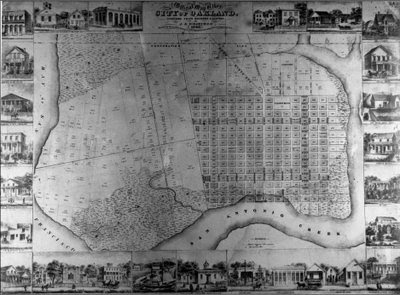 In 1842, Whitcher created one of the first official surveys of the Iowa territory along the Mississippi River. His work followed these instructions, “[F]or the survey of the valuable islands in the Mississippi River, not heretofore surveyed, having regard to the timber or quality & location of soil, and those only which are embraced in this surveying district.”

Census records next find Whitcher living in Oakland in 1860, with his occupation described as “surveyor.” The 1870 census lists his occupation as a civil engineer and then in the 1880 census, he is again listed as a surveyor. A famous map of Oakland [see above] was created by Whitcher and bears his name. He can also be found as a surveyor for the railroads and projects in Iowa, Minnesota and Wisconsin. Many of the early tract maps in Oakland bear his name.

The day after Christmas in 1863, Whitcher and a group of prominent Oakland leaders met to organize Mountain View Cemetery. Thirteen months later they met again and elected Dr. Samuel Merritt as President of the Board of Trustees, Hiram Tubbs as Treasurer and J.E. Whitcher as Secretary. They also appointed Rev. Samuel T. Wells as the first Superintendent. In 1870, the Trustees elected a whole new leadership team and Whitcher was replaced as Secretary by Edmund P. Sanford.

He apparently had other interests, as well, as records show him being granted the rights to a rail line on Second and Franklin streets in 1872 along with H. F. Shepardson, Theodore Meets and Hugh Slicer. Slicer is also buried at Mountain View.

On February 26, 1876, as chair of the local Republican Party, Whitcher led the convention that nominated Enoch Homer Pardee to be Mayor of Oakland. Pardee was elected and succeeded Mack Weber. Pardee only served one term, but 16 years later his son George would be elected Mayor and later Governor of California. The Pardees are also buried at Mountain View Cemetery in Plot 1.

On August 11, 1870, along with Colonel Jack Hays and other Oaklanders, Whitcher played a prominent role in organizing a society of Alameda County Pioneers.

He died in Oakland in January 1888 of kidney failure and is buried in a family plot near the Cogswell monument.