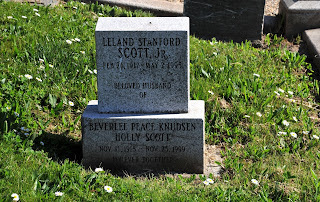 The name Leland Stanford Scott, Jr. caught my eye on this gravestone, but it turns out that his wife has the interesting biography. Not only does she come from interesting stock, but she had a pioneering career as a woman in journalism. Here's her obituary from the December 11, 1999 Contra Costa Times:

Beverlee Peace Knudsen Holly Scott died at her home in Kelly Ridge, Oroville, on Thanksgiving Day after a brief illness. She was the daughter of the late telephone pioneer, Ralph E. Knudsen, known as the "Man who linked the East to the West" when he made the last splice in the nation's first transcontinental telephone line at Wendover, Utah on June 17, 1914. Born the eleventh hour of the eleventh day of the eleventh month the year the Great War ended, her middle name "Peace" was given to commemorate this day.*

The native Californian was born in Winters (Yolo County) and raised in Berkeley, where she attended school and served as president of the Theta Gamma Sorority.

She was a long time resident of Walnut Creek. In 1971 she married Leland Stanford Scott, Jr. They moved to Kelly Ridge in Oroville in 1975. They enjoyed world travel, fishing, hiking, and camping. He preceded her in death in 1995.

Mrs. Scott was a journalist and was the first editor of Tempo, a magazine for the State Farm insurance companies in Berkeley. She was a member of the Pacific Coast Association of Industrial Editors and was elected Corresponding Secretary, the first woman to hold this office. She was on staff of the Lafayette Sun prior to becoming founding editor of the Valley Pioneer Newspaper in Danville. She worked for the San Francisco Chronicle writing the Women's World column, also known as East Bay Banter. She served as Assistant Editor at Children's Hospital in Oakland prior to becoming Public Relations Director for Samuel Merritt Hospital, a position she held for fifteen years.

Thanks Mike for your comprehensive
synopsis on the life and career of Beverlee Scott. I had the distinct privilege of knowing her very well as she was my mother-in-law.
Though a woman of great accomplisments her focus always remained on the welfare of her family.

She is greatly missed.