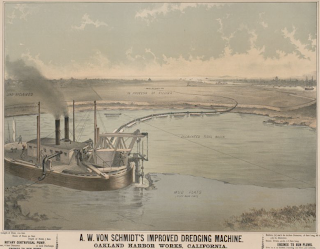 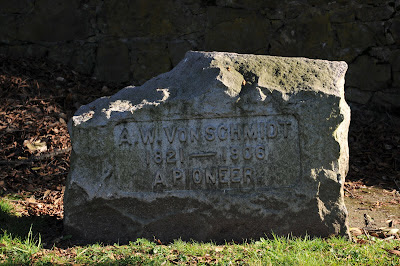 The Prussian-born Alexis “A.W.” Von Schmidt arrived in San Francisco in the Gold Rush year of 1849, but didn’t partake in mining endeavors. A civil engineer by training, Von Schmidt worked as a surveyor, mapping public lands and Spanish land grants throughout the state and became a controversial figure in the California and Nevada’s water wars.

Although he was a very successful businessman in the dredging and water business, Von Schmidt is best known to history for three endeavors, none of which was completely successful.

In 1872 and 1873, von Schmidt was hired to mark the state line between Nevada and California. His survey erred slightly creating a crooked boundary that had to be corrected. There is a California State Historical marker commemorating his efforts on the border.

He will also be remembered as the man who devised a scheme to divert water from pristine Lake Tahoe, through the Sierra Nevada Mountains, to San Francisco. Luckily, for future generations of people who have enjoyed the beautiful waters of Lake Tahoe, Nevada won this water war.

His third semi-failure occurred in 1873, when Von Schmidt was hired to find the perfect location for an astronomical observatory, funded by James Lick who made his fortune in real estate and the Gold Rush. Von Schmidt determined that the best location was on Dollar Point east of Tahoe City, but ultimately it was built in San Jose. In the case, hindsight may have proved the confident Von Schmidt correct.

Although he may be remembered for his grand failures, Von Schmidt had some major successes as a businessman. In June 1857, along with Mountain View Cemetery denizen Anthony Chabot and John Bensley, he found the San Francisco Water Works. The new company created the first regular supply of water from Lobos Creek, which previously was brought in on carts and sold at exorbitant prices.

In 1869, Von Schmidt titillated the residents of San Francisco with his plan to dynamite the submarine shelf between Alcatraz and Yerba Buena Island to open the channel for shipping. Residents gathered on Telegraph Hill to view the event, which Von Schimdt promised would “rock windows” and create an “earth wave.” Although the blast was successful, sending a column of water 200-feet in diameter into the sky, residents went home disappointed when the shockwaves failed to reach shore.

Alexis von Schmidt never built his “Grand Aqueduct,” but the water wars that he was so intimately involved with rage on with battles over Hetch Hetchy, north-south water rights and irrigation rights for the Central Valley.

Perhaps the Wednesday, April 25, 1900 issue of the Reno Gazette provided the most fitting epitaph for Von Schmidt when they lambasted him as “the would-be water stealer of the century” for his proposal to pipe water from Lake Tahoe to San Francisco.
Posted by Michael at 5:53 AM

A.W. Von Schmidt is my Great Grandfather and I am demanding that you remove your insulting and untrue comment about him. If you fail to do that,within 72 hours from this date, September 2, 2008, I will file suit against you.

A.W. Von Schmidt is the father of the late Lily Tilden, who was the wife of the late Charles Lee Tilden, and we take offense to your comments.

Was the lawsuit ever filed??