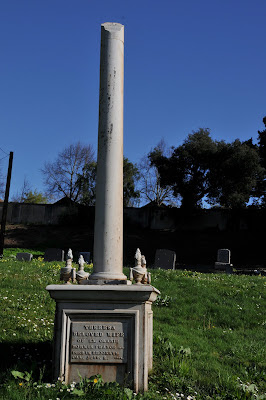 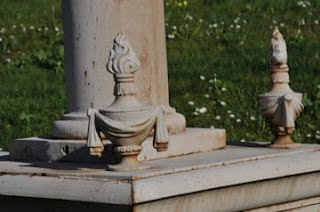 This post isn’t so much about the person buried here, but it’s about her gravestone, which has some fascinating elements. From a distance her gravestone looks like a typical marble marker, but on closer inspection one can spot rust. Theresa’s gravestone is made out of cast iron, which according to Douglas Keister in “Going Out in Style” was an option provided to families without a lot of money. Cast iron gravestones are relatively rare and this is a particularly special one since it has other interesting features.

The broken column, which one often sees in cemeteries, is usually a symbol of a child or young person whose life was cut short. In this case, Theresa Olanie died of hepatitis at 35 years of age, leaving behind her 4-year-old daughter Jenny, who was born in East Oakland and barely survived a childhood bout with typhoid fever.

The base of the gravestone is adorned with four slightly rusty flames, which are a symbol of eternity.

Theresa and her husband Felix Xavier (F.X.) Olanie came to Oakland from Alsace-Lorraine while France was under the rule of Napolean III. They sold their house and sailed across the Atlantic Ocean on the ship New York. They made their way to San Francisco where they lived for seven years where F.X. worked as a patternmaker. The family became very involved with the local French community, which clustered around Clay Street.

The Brooklyn referred to on her gravestone is the old Oakland neighborhood, not the New York borough of the same name. According to family histories, F.X. married two more times to Jane and then to Katherina, both of whom the family records claim are buried in the family plot in Oakland. Felix died in 1907 of myocarditus and is also buried in the family plot.
Posted by Michael at 7:29 PM

Teresa is my relative. Her husband Felix was my great-grandfather's brother.