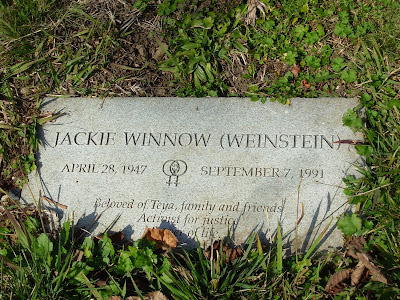 Jackie Winnow was a feminist, lesbian and progressive activist who played a major role in transforming health care activism. She was the first coordinator of the Lesbian/Gay and AIDS unit of the San Francisco Human Rights Commission, where her work focused on discrimination both within and without the LGBT communities. In 1985, she was diagnosed with breast cancer and she founded the Women’s Cancer Resource Center in Berkeley the next year.

Winnow's involvement in the feminist health movement inspired her cancer activism. She once said, "We have to stop being nice girls and start fighting as if our lives depend on it, because they do." She became an outspoken cancer activist and infused the movement with energy and focus.

She also was a forceful voice for people with AIDS and once stated, “Both of these diseases are life-threatening and yet I have seen my community rally around one and overlook the other…No one takes care of women or lesbians except women or lesbians, and we have a hard enough time taking care of ourselves, of finding ourselves worthy and important enough for attention.”

After her death, her lover Teya Schaffer wrote a heartrending account of her grief called “A Ritual of Drowning: Poems of Love and Mourning.” The San Francisco Board of Supervisors adjourned in her memory.
Posted by Michael at 8:08 PM

I will remember you always.

Oh Jackie, I remember you always, and quote you often.