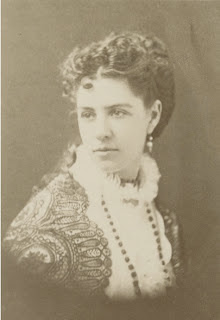 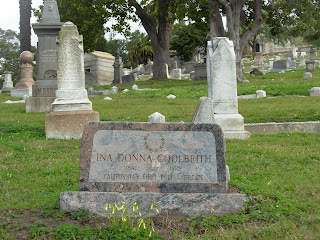 Ina Coolbrith was born Josephine Donna Smith to Agnes Moulton Coolbrith and Don Carlos Smith, a brother of the Mormon Prophet Joseph Smith, Jr.. Leaving her polygamous marriage and the Mormon Church, Agnes took her daughter with her and moved to Saint Louis, where she married a newspaperman named William Pickett. They traveled overland to California in 1850 and Ina Coolbrith is said to have been the first white child to enter California, riding on the saddle of Jim Beckworth.

To avoid identification with her former family or with Mormonism, Ina's mother reverted to using her maiden name, Coolbrith. Her daughter followed suit, and shortened her name from Josephine to Ina to further conceal the relationship.

In 1873 Ina became librarian at the Oakland Free Library, and, in 1895, befriended and mentored the young, 12-year-old Jack London. Jack London called her his "literary mother." She also mentored the poet, George Sterling. Late in life, she campaigned for a proper burial in Westminster Abbey for the remains of her favorite poet, Lord Byron.

In 1915, she was named California’s first Poet Laureate by Governor Hiram Johnson, a post she held until her death.

On the day of her funeral the Legislature adjourned in her memory and soon afterward named a 7,900 foot peak near Beckworth Pass "Mount Ina Coolbrith." Her grave site, within sight of Frank Norris' monument at Mountain View Cemetery went unmarked until September 1986 when the Ina Coolbrith Circle placed the headstone pictured above in Plot 11.
Posted by Michael at 3:32 PM

Glad to find Ina in your list of women luminaries. She is one of the people I alwasy include on my tours.