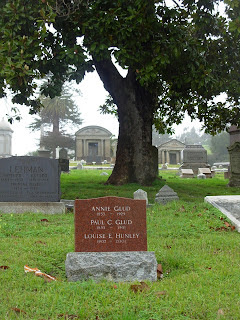 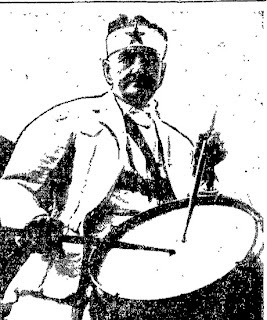 Annie Glud became famous in 1921 when she revealed that she was drummer boy Tom Hundley, who marched with Ulysses S. Grant and the Union forces. Glud enlisted with the Union forces disguised as a boy and only Grant and Glud’s father knew of her secret.

Over the years, Glud regularly participated in the annual Armistice Day parades in Oakland and kept the drum until her death.

Glud made news two other times in her life, the first time again performing “the work of a man." In 1897, she joined a group of women for a two week search for gold in Shasta County. A year before the excursion Glud had discovered an old mine on her ranch just north of Redding. According to newspaper accounts, “Mrs. Glud told her friends about it, and she persuaded six of them to go prospecting in the vicinity…Each woman put on bloomers, rough boots, leggings, a man’s working shirt and a black slouch hat. Around their waists they strapped canteens and pans and on their shoulders they carried picks and shovels.”

In 1921, Glud again made news when she donated a historic cinnamon bear to President Warren G. Harding which was carved out of redwood by James Marshall, one of the discoverers of gold in California. According to the Oakland Tribune, “A letter offering the bear to the President was sent some weeks ago and has just been answered by the President, carrying his appreciation of the memento and accepting the gift.”
Posted by Michael at 5:06 PM

The whole story is made up. Her brother Archibald Hunley is my 3rd Great-Grandfather. She had five brothers, not four. There was Archibald, James, Jesse, Thomas, and Richard Hunley. Richard was the only one that did not serve in the Civil war as he was too young, being born in 1852. All four of the other brothers served, but all on the side of the Union. As for her father serving, that is all a lie. Jeremiah Hunley was my 4th Great-Grandfather and he was somewhat of a scoundrel, having been married nine times. A few of the marriages took place when he hadn’t divorced previous wives. Several of the marriages took place during the mid-1860s, therefore he would not have been able to be in the war and be marrying nine different women during the same time.

Jacob, can you provide some background on the story not being true? This is of great interest to the docents.