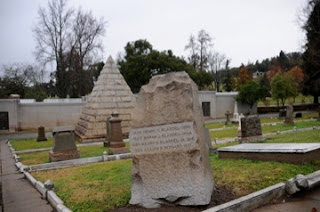 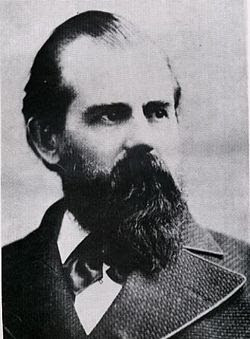 Blasdel was born near Lawrenceburg, Indiana and married Sarah Jane Cox in 1845. In 1852, he made his way to San Francisco via Nicaragua. From 1852 to 1867 he operated a produce commission house before selling off the operation. He worked as a farmer in Santa Cruz, storekeeper and river boat captain before he came to Nevada in 1859, where he was active in mining and milling. Blasdel was the superintendent of the famous Potosi, Hale & Norcross mines.

In Feburary 1866, the Nevada legislature created Lincoln County. In March 1866, Gov. Henry Blasdel traveled to the area to organize the new county. This foray into the wilderness frontier nearly proved fatal for the governor and his party. It was thought that the group perished because for three months there was no communication from the group. But they eventually straggled into the Pahranagat Mining District, a bit worse for the wear but alive.

Like his father, Blasdel was deeply religious and a strict believer in abstinence. He was also and ardent opponent of the burgeoning gambling industry in Nevada. In his 1867 message to the Legislature he stated:

“Gaming is an intolerable and inexcusable vice. It saps the very foundation of morality, breeds contempt for honest industry, and totally disqualifies its victims for the discharge of the ordinary duties of life. Every energy of the State should be invoked to suppress it.”

In 1869, the Nevada Legislature overrode Blasdel’s veto of a bill legalizing gaming. In his blistering veto message, Blasdel called gambling “the root of all evils.”

In 1891, Blasdel moved his family to Oakland, California, where he died on July 22, 1900. Sarah Jane remained at their house at East 24th Street & Orange in the Fruitvale District of Oakland until her death on November 1, 1904.

Governor Blasdel’s death received a one-line obituary in the San Francisco Call. He became the second Nevada Governor to be buried at Mountain View, following Charles C. Stevenson, who died in office a decade earlier.

Good day !.
might , perhaps curious to know how one can manage to receive high yields .
There is no need to invest much at first. You may begin to receive yields with as small sum of money as 20-100 dollars.

AimTrust is what you thought of all the time
The company incorporates an offshore structure with advanced asset management technologies in production and delivery of pipes for oil and gas.

Its head office is in Panama with affiliates around the world.
Do you want to become really rich in short time?
That`s your choice That`s what you wish in the long run!

I feel good, I started to get real money with the help of this company,
and I invite you to do the same. It`s all about how to select a correct partner who uses your money in a right way - that`s it!.
I make 2G daily, and my first deposit was 1 grand only!
It`s easy to start , just click this link http://fuwuwufysu.1accesshost.com/qylehyz.html
and go! Let`s take our chance together to get rid of nastiness of the life