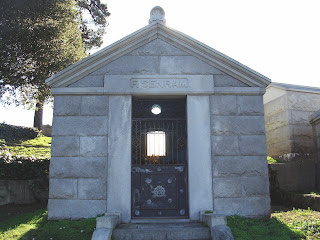 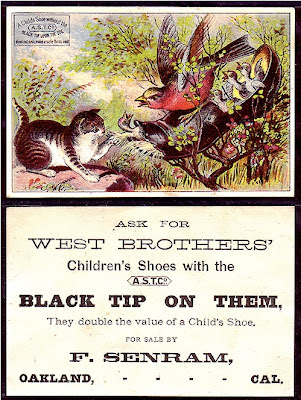 Frederick Senram was a noted shoe merchant in Oakland. He was born in Oldendorf, Germany in 1836 and moved to San Francisco, California in 1859, where he lived for four years.

In 1863, he moved to Oakland and opened a shoe repair and retail store named F Senram and Company at 3rd & Broadway, which he eventually moved to 1003 Broadway. He retired from the business in 1904.

Apparently, Senram had one of the nicer stores in Oakland. An article in the October 10 1907 Oakland Tribune commented, “There are no prettier show windows in Oakland or any coast city…An inspection of these show windows will reveal an artistic combination of woods and color effects all made complete with elegant electric lights.”

After his death, his daughter Bertha Sneathen successfully sued to prevent her step-mother Pauline Senram from inheriting any of the estate.

His older brother Frank Senram was a partner in the shoe business. He was a member of the German club Oakland Turn Verein and the Tecumseh Tribe No. 62, Improved Order of Redmen. His widow Wilhelmina died after accidentally drinking poison in the middle of the night, mistaking it for her medication.
Posted by Michael at 7:08 AM

Mr Senram retired in 1904, but his accountant Ward Pelton took over the shoe and repair shop when it moved to 1003 Broadway, which would explain the article depicting the 1907 window display. My ancestor is Ward Pelton and we have a family photo of him outside the front of the store with his fellow employees.

Pelton and family are also in Mountain View Cemetery.