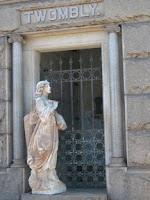 Charles "C.H." Twombly was a San Francisco capitalist who in May 1875 was one of the founders of Oakland's First National Gold Bank. He was an active member of the Oakland Lodge of Masons and the Oakland Commandery, Knights of Templar. Twombly's wife Mary was from the Burchard family, who are also buried in the crypt.

Rev. John L. Burchard moved from Missouri to Marysville, California, remaining there four years, followed by six years in Stockton and four in Gilroy. After returning to Marysville he was appointed Indian agent at Round Valley. In 1872 the family removed to Oakland, in order to afford their children better educational advantages.
Posted by Michael at 5:32 PM