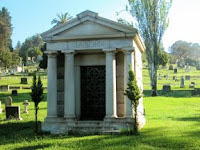 John Augustus Bohn was the chief architect of Guam's legal system and co-editor of the Alaska state code.

John Bohn graduated from Stanford University and the law school of the University of California at Berkeley. In 1951, he was asked to draft Guam's legal code in the territory's transition from Navy control to civilian status.

He set up Guam's court system, served as counsel for the territory's Legislature and practiced law. In 1976, he filed suit on behalf of Guam to recover land he charged had been taken by the Navy with only minimal compensation. Mr. Bohn went to Alaska while it was preparing to become a state in the late 1950's and served as co-editor of its state code.
Posted by Michael at 3:38 PM

I was glad to see the explanatory note. The father of John Augustus Bohn was actually Ralph Edward Bohn, who was the son of Julius Augustus Bohn.