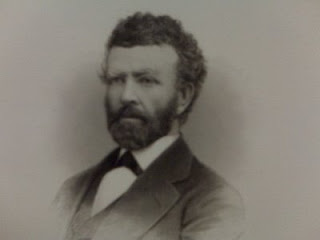 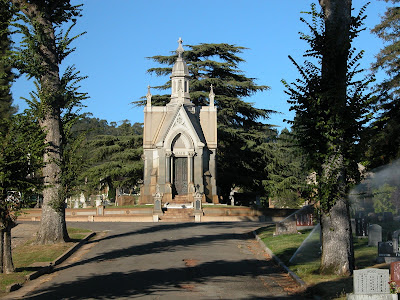 Charles Main made his fortune boating supplies on the Sacramento River. In fact, Main owned that river's first side-wheeler, the New England.

He was later a partner in Main & Winchester, what was said to be San Francisco's largest saddle and harness business. He also held an interest in San Francisco's "street railroad" business. He had a hand in widening Kearney Street from Market Street to Broadway to accomodate the "railroad."

In his last few months he deeded a large portion of land in Oakland known as Alameda Point to his daughter Flora McDermot.

Main Street in San Francisco is named after him.

Upon learning that Main was building a grand mausoleum to his own memory, the biting satirist Ambrose Bierce penned this piece:

A Word to the Universe by Ambrose Bierce

[Charles Main, of the firm of Main & Winchester, has ordered a grand mausoleum for his plot in Mountain View Cemetery.
--City Newspaper.]

Charles Main, of Main & Winchester, attend
With friendly ear the chit-chat of a friend
Who knows you not, yet knows that you and he
Travel two roads that have a common end.

We journey forward through the time allowed,
I humbly bending, you erect and proud.
Our heads alike will stable soon the worm--
The one that's lifted, and the one that's bowed.

You in your mausoleum shall repose,
I where it pleases Him who sleep bestows;
What matter whether one so little worth
Shall stain the marble or shall feed the rose?

Charles Main, I had a friend who died one day.
A metal casket held his honored clay.
Of cyclopean architecture stood
The splendid vault where he was laid away.

A dozen years, and lo! the roots of grass
Had burst asunder all the joints; the brass,
The gilded ornaments, the carven stones
Lay tumbled all together in a mass.

A dozen years! That taxes your belief.
Make it a thousand if the time's too brief.
'Twill be the same to you; when you are dead
You cannot even count your days of grief.

Suppose a pompous monument you raise
Till on its peak the solar splendor blaze
While yet about its base the night is black;
But will it give your glory length of days?

Say, when beneath your rubbish has been thrown,
Some rogue to reputation all unknown--
Men's backs being turned--should lift his thieving hand,
Efface your name and substitute his own.

Whose then would be the monument? To whom
Would be the fame? Forgotten in your gloom,
Your very name forgotten--ah, my friend,
The name is all that's rescued by the tomb.

For memory of worth and work we go
To other records than a stone can show.
These lacking, naught remains; with these
The stone is needless for the world will know.

Then build your mausoleum if you must,
And creep into it with a perfect trust;
But in the twinkling of an eye the plow
Shall pass without obstruction through your dust.

Another movement of the pendulum,
And, lo! the desert-haunting wolf shall come,
And, seated on the spot, shall howl by night
O'er rotting cities, desolate and dumb.
Posted by Michael at 8:42 PM

Mr. Colbruno,
Can you tell me how I can acquire a reproduction-quality copy of the Chas Main photo you illustrate here for a book on the history of Rochester, NH, where his ancestors lived? Thanks,
Kathryn Grover
kgrover@kgrover.com

Hope you got my just-sent post on how to acquire a reproduction-quality copy of the Charles Main photograph for a book on the history of Rochester, NH.
Main's ancestors were from Rochester, and he largely funded the Parson Main statue in the city's Central Square.

Thank you for this history, Michael! Here is a photo I just took of the mausoleum: https://www.flickr.com/photos/stewf/15285204060