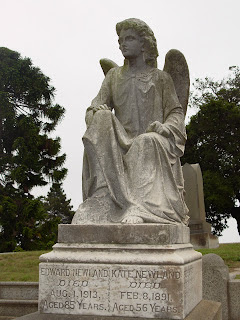 A popular monument which I often see being photographed.

Edward Newland was born in Kirkdale, England in 1828 and moved to Boston in 1837. In 1849, after hearing about gold in the California hills, he chartered a boat with 360 others and headed west.

Rather than heading to the mines with the others, he started a stage line. He soon established a draying business and began amassing a small fortune.

He moved to Oakland in 1859 and resided at 2nd & Webster Street. He was one of the first people in the area to start a livery stable business in the area and he was known to have some of the finest thoroughbreads in Northern California. After his retirement, he bred horses for Senator Stanford, many who were frequent champions at local race tracks.

Newland was a member of the vigilance committees who took law and order into their own hands, frustrated with alleged corruption and inaction from law enforcement officials.
Posted by Michael at 8:13 PM