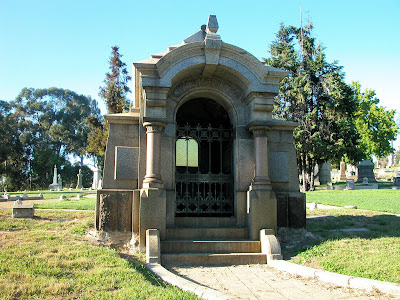 In 1887 William Walkerley died in East Oakland leaving an estate valued at $650,000*. He left a young widow to whom was born a son shortly after her husband's death. Numerous claims against the estate were made and the case landed in the California Supreme Court. The issue at hand was whether a trust could be made in perpetuity. Numerous heirs were paid off in an out of court settlement and the widow reportedly received $500,000.

The son, Willie Walkerley, died at the tender age of six.

According to my family history 1887 William Walkerley died in the San Francisco earthquake. He went out to San Francisco 49 years previously with £100. He returned in 6 years with £7,000 and went out again to the gold diggings and made a quarter of a million.
After bequests to his recently married wife of £20,000 and £20,000 to possible posthumous child, the rest (£116,000) to be divided between 16 nephews and nieces (Robert Johnson's children). He amassed a fortune in 10 years and was a greatly esteemed philanthropist. The money was invested in buildings in San Francisco and was to remain invested for 25 years but the devisees could draw the interest, expected to be 10 per cent.

The family clubbed together to send out Richard Johnson (my mother's Uncle Dick). He went out as a young man to claim the money. He contested the will, as the money wasn't forthcoming, but the American judge ruled it should all go to the widow - and he subsequently married her. Great-uncle Dick arrived back at Southampton with 9d.