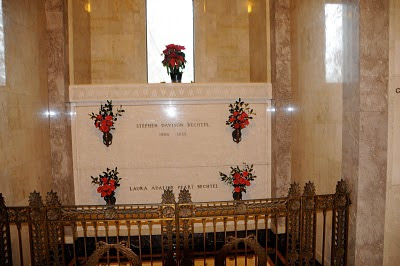 Stephen Bechtel was a native of Aurora, Indiana and the son of Warren Bechtel, the founder of the W.A. Bechtel Company. Around 1906 the family moved to Oakland where Stephen graduated first in his class at Oakland Technical High School in 1917.

His engineering training was acquired in part in the field as a boy on summer jobs with his father, and during World War I where he served in France with the 20th Engineers, and in part in the classroom at the University of California at Berkeley. He left college in 1921 to join his father's company. The California Alumni Association's obituary called him "perhaps Cal's most successful dropout."

Ascending to the company presidency in 1935 following his father's death in 1933, he took the company international, placing Bechtel in a leadership position in building the Hoover Dam, San Francisco-Oakland Bay Bridge, BART, and the Saudi-Arabian city of Jubail. He was also responsible for work on major oil pipelines, nuclear reactors, power plants, hotels and 500 World War II liberty ships. Stephen Bechtel's leadership turned the company into one of the world's largest engineering firms.

Bechtel was named by Time magazine as one of the twenty most influential business geniuses of the 20th Century. The American Society of Civil Engineers named him one of the top ten builders of the past half century and Fortune magazine called him "the boldest and maybe the biggest builder in the world."

This site can be contacted at michael.colbruno@gmail.com
Posted by Michael at 8:06 PM