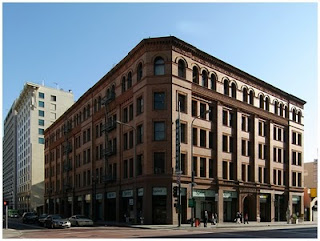 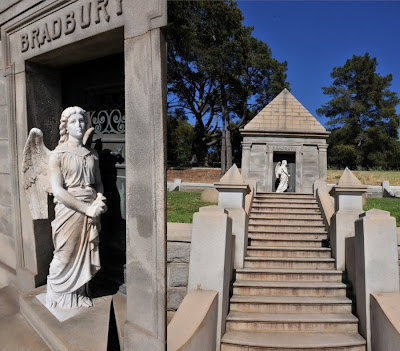 Lewis "L.L." Bradbury is best remembered for an unusual building in Los Angeles that he commissioned in the 1890's. Bradbury's architect was George Wyman, who had no formal training and designed another notable structure. The five-story Bradbury Building with its light filled atrium and wrought iron decor was largely ignored in contemporary architecture circles. Now a National Historical Landmark and Los Angeles tourist attraction, the building is a testament to the vision of Bradbury and Wyman.

Bradbury, a native of Maine, developed the rich Tajo silver and gold mines in Sinaloa, Mexico. He made a fortune while in Mexico and also picked up a bride, the former Simona Martinez. On their return to America, the Bradburys established homes in both Northern and Southern California in order to oversee their rapidly growing real estate empire. Their Oakland residence was at 1040 Filbert Street, which they purchased in 1875.

The city of Bradbury in Southern California's San Gabriel foothills is also named after the couple. In 1892, Bradbury purchased the 2750-acre Rancho Azuza de Duarte, which is where the town now sits.

In the 1880's and 1890's the Bradbury's spent most of their time at their beloved Oakland home. Simona, who did not speak English at the time of her wedding, became an accomplished businesswoman in her own right. She was the executor of her husband's estate and oversaw the completion of the Bradbury Building.

In 1894, Simona, a devout Catholic, purchased a lot on Millionaires Row and ordered the construction of a family mausoleum. The angel at the gate is believed to have been ordered by her. L.L. Bradbury was placed in the family vault a year later in September 1895. Several years later Simona was taken ill while living in Los Angeles and asked to be taken to her home in Oakland, where she died.

Many relatives are buried on the surrounding lawn.

YOU CAN CONTACT ME AT michael.colbruno@gmail.com
Posted by Michael at 5:45 PM