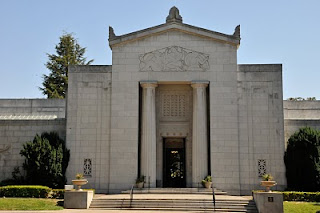 This Art Deco addition to Frederick Law Olmstead's Victorian cemetery was designed by William P. Day of the San Francisco architectural firm of Weeks & Day. The central section was built in 1929 with new additions added in 1934, 1946, 1949, 1954 and 1964. The stairway at the west end of the last addition is of a temporary nature because further additions had been planned.

The facade of the Mausoleum is of the Art Deco style or Moderne style that was popular in the 1920s and 1930s. Other Bay Area buildings of this style were designed by Weeks & Day, including Oakland's I. Magnin building. William Day was also the Director of Works for the Golden Gate Exhibition on Treasure Island in 1935, a wonderland of Art Deco design.

Art Deco was the first widely popular style in the United States to break with the revivalist tradition represented by the Beaux-Arts and period houses. It was a style that consciously strove for modernity and an artistic expression to complement the machine age. Emphasis on the future rather than the past was a principal characteristic. Ornamentation consists largely of low-relief geometrical designs, often in the form of parallel straight lines, zigzags, chevrons and stylized floral motifs.

The best illustrations of the style are probably the great movie palaces of the 20s and 30s, where curtains, murals and light fixtures bore the same Art Deco motifs as the building itself. Oakland's Paramount and Fox Theaters are classic examples. Art Deco tended to be eclipsed by the International Style that appeared in the 1930s and which rejected any nonessential decoration. 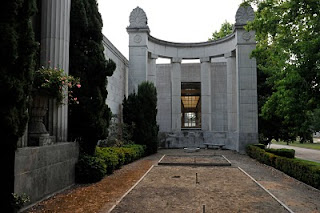 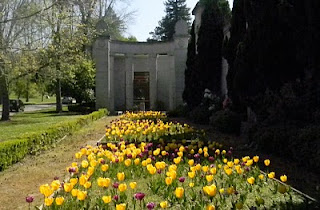 It appears the the Mountain View Cemetery trustees of the depression era wanted the most up-to-date architecture and spared no expense. The quality of the materials and the skill of the craftsman is evident if one examines the marble, bronze, art glass and the fixtures such as chandeliers, banisters and windows. According to Bob Sorenson, much of the glass came from Germany and the marble and most of the craftsmen came from Italy.

This site can be contacted at michael.colbruno@gmail.com
Posted by Michael at 7:23 PM