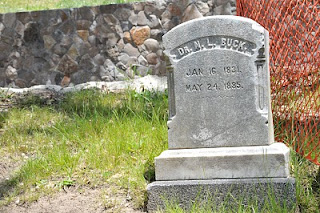 [Photo of Buck gravestone by Michael Colbruno]
A Doctor Murdered by an Angry Husband
From the Lowell Courier (Massachusetts), May 26, 1885

Dr. N.L. Buck, a highly respected citizen of Oakland, Cal., was shot at his door Sunday night by Henry P. Prindle, a member of Joe Hooker post, G.A.R. [Grand Army of the Republic]. Prindle was arrested.
At the police station he said he shot Buck because his wife told him Buck had taken improper liberties while she was under his professional care. Dr. Wythe, a friend of the murdered physician, says he attended Mrs. Prindle for a time and believes her to be insane.  He thinks she labors under the hallucination that Dr. Buck was guilty of unprofessional conduct. Mrs. Prindle’s female friends assert, on the contrary, that Buck was guilty of everything charged against him. Dr. Buck was a widower, and leaves a grown up family.
A Springfield dispatch says Dr. Buck went there from Vermont in 1867. He had a large and lucrative general practice, although making a specialty of female diseases. He and his family were well thought of and had many friends. The doctor was a member of the Massachusetts Medical society and rarely came in contact with the physicians of the city. His wife’s failing health compelled him to go to California.
After Buck’s death there was a fight over his $5,000 insurance policy between his father, adopted children and fiancée. Although not named in the policy, the father prevailed.
I CAN BE CONTACTED AT michael.colbruno@gmail.com
Posted by Michael at 7:21 PM