Joseph Burwell McChesney was born in Brunswick, New York on October 12, 1832 to Quaker parents.  After eighteen years living on a farm, McChesney went to college, eventually graduating from Union College in Schenectady, New York.
In February, 1858, he left New York for California, coming by way of the Isthmus route and arriving in San Francisco a month later. While in Forbestown in Yuba County he married a miners daughter named Sarah S. Jewett. Shortly after his marriage he began teaching in both Forbestown and Oroville.
In 1859 he became the Republicans nominee for the Legislature. He was defeated and returned to teaching. From 1862 to 1867 he was principal of the high school in Nevada City.  In 1867 he was offered the job as the principal of the first grammar school in Oakland.  In 1869 he organized the high school, and was appointed its principal, a position he held for 25 years.
McChesney also served as president of the Equity Building and Loan Association of Oakland, president of the Home Security Building and Loan Association and was elected as a Trustee of the Oakland Free Library.
The McChesney’s spent thirty years in Oakland, but also lived in Mill Valley and San Francisco. Their daughter Clara Taggart McChesney became an artist of some note in New York.
When his death was announced, the Oakland City Council ordered flags flown at half-mast. 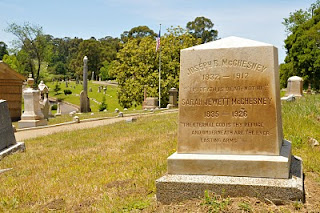 [Photo of McChesney gravestone by Michael Colbruno]
I CAN BE CONTACTED AT michael.colbruno@gmail.com
[Bio excerpted from "The Bay of San Francisco," ancestry.com and the Oakland Tribune]
Posted by Michael at 6:47 PM