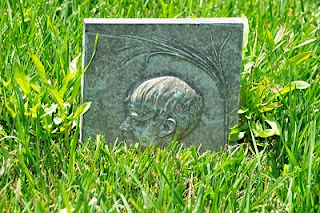 This small bronze marker is believed to be the smallest gravestone in Mountain View Cemetery. The image is of Lincoln Doyle  (1895-1904), who died at age nine from a ruptured appendix. The gravemarker was made by the boy’s father Michael Doyle, a trained cabinet maker who had also studied sculpting and painting. At the time of the boy’s death, Michael Doyle was working as a school teacher in San Francisco.
Michael Doyle (1850-1938) is also buried in the plot, but his grave is unmarked. He was separated from his wife Emma at the time of his death.
I CAN BE CONTACTED AT michael.colbruno@gmail.com
[Bio excerpted from Doyle family genealogy and Mountain View Cemetery docent notes]
Posted by Michael at 7:40 PM