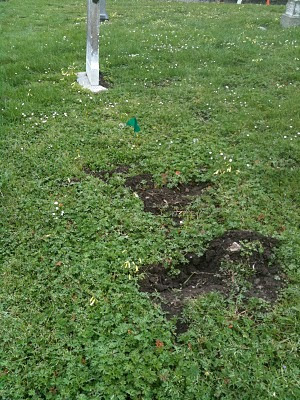 Jeanne Carr was an amateur botanist and her husband Ezra was a physician, geologist and chemist. Jeanne Carr met Sierra Club founder John Muir when she served as one of the judges at an exhibition of inventions at the Wisconsin State Fair where Muir had some of his inventions on display.

In 1861, John Muir enrolled at the University of Wisconsin where Ezra Carr was a professor of chemistry and natural history. Ezra Carr introduced John Muir to geology, and Jeanne Carr mentored Muir and introduced him to many famous literary figures of the day. Jeanne Carr recognized Muir's natural talent for writing and send his letters to publishers. In 1865, Jeanne Carr and John Muir began a long history of correspondence between themselves.

In 1869, the Carrs moved to Oakland when Ezra Carr received an appointment as the first professor of agriculture at the new University of California, a post he held for the next six years. Muir had arrived in California a year earlier where he discovered his love for Yosemite and his passion for hiking. During their years apart, Jeanne Carr and John Muir continued their correspondence. Meanwhile, Ezra Carr was creating a practical curriculum focused on helping farmers rather than on research and theory.

Carr's University of California career came to an end in 1873 when he instigated a movement to abolish the Board of Regents and all colleges of the university except for agriculture and mechanical arts. The movement eventually failed and the Regents "dispensed with his services in view of his incompetency and unfitness for the duties of the chair."

In 1875, Ezra Carr was elected as California State Superintendent of Public Instruction, which placed him on the very Board of Regents he wished to abolish. He served as Superintendent until 1880.

When Jeanne Carr me Dr. John Strenzel and his family in Martinez, she decided that the daughter Louie would make a great match for her friend John Muir. On September 15, 1874, Jeanne invited Louie and her mother Louisiana to her home to meet John Muir. Mrs. Strenzel was impressed, but John Muir was difficult to tie down, as he was always off hiking in the mountains. Jeanne tried several times to entice Muir to Martinez for a visit, finally succeeding in 1877. John and Louie finally got married on April 14, 1880.

According to historian Kevin Starr, the Carrs moved to Pasadena in 1876 where they developed their estate Carmelita into a botanical showcase, helping establish the city as the premier garden and floral city in Southern California.

[First page of 1867 letter from Jeanne Carr to John Muir] 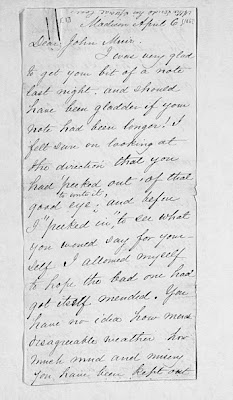 YOU CAN CONTACT ME AT MICHAEL.COLBRUNO@GMAIL.COM
Posted by Michael at 1:59 PM