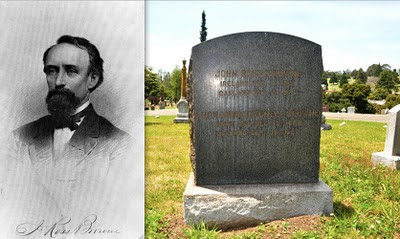 [Photo of Ross Browne gravestone by Michael Colbruno]
John Ross Browne was born near Dublin, Ireland, in January 1821. His father was a journalist who landed in jail when one of his editorials upset the British aristocracy. His sentence was commuted after three months on the condition that the leave Ireland. The family ended up in Kentucky, where the elder Browne set up a private girls school.

Ross Browne was a man of interests, who loved reading, traveling, writing and playing the flute. He learned shorthand, worked for his father, clerk, attended medical school and worked as a deckhand on a flatboat. He wrote a book called "The Confession of a Quack: The Autobiography of a Modern Aesculapian," which was the beginning of his lifelong interest in exposing quacks and frauds. It is said that his literary career was encouraged by Edgar Allen Poe and that one of his books inspired Herman Melville to write “Moby Dick.”

In 1844, Browne married the former Lucy Ann Mitchell with whom he had two children. The next year Browne began a long career working for the government. In 1849, the family left for San Francisco where he was appointed Third Lieutenant for the United States Revenue Service. His job was to find ways to keep sailors from deserting their duty and taking off for the gold mines. During this time he was also responsible for setting up post offices between San Francisco and San Luis Obispo.

In September 1849, fellow Mountain View Cemetery denizen Senator William Gwin, appointed Browne as the official reporter to the Constitutional Convention in Monterey, for which he was paid the princely sum of $10,000.

Browne used his payment to travel across Europe and write about his experiences. In 1853, Browne became a “Confidential Agent” for the United States government. He was tasked with investigating custom house operations and report on fraud, corruption and poor work habits. Browne eventually upset the politically powerful and well-connected and was fired.

In 1854, he returned to the San Francisco Bay Area and devoted himself to his mining interests, real estate and an irrigation project. He also designed and had built a palatial home in Oakland’s Rockridge district known as “Pagoda Hill.” Browne is not only remembered for his vast literary works and government work, but as a passionate champion for the rights of the Chinese and Indians in California.

He died suddenly in 1875 at the age of fifty-four, apparently of acute appendicitis.

I CAN BE CONTACTED AT michael.colbruno@gmail.com
Posted by Michael at 8:47 PM