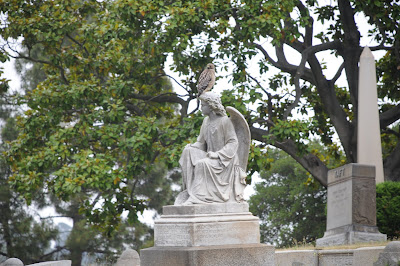 [Photo of Newland gravestone with hawk by Michael Colbruno; Click image to enlarge]

Edward Newland was born in Kirkdale, England on May 12, 1827. He lost both parents by the time he turned three and was raised by his brother. In 1833, he was sent across the Atlantic to meet his brother who had emigrated to Boston. He stayed until 1848, before moving west.

Newland traveled around the Horn in inclement weather, delaying the ship’s arrival for weeks. Unlike most people on the ship, Newland did not head for the gold mines. He settled in South Park in San Francisco and started a stage coach line, which made him quite wealthy. He soon opened a drayage business (hauling goods on wagons), which carried much of the produce in San Francisco at the time.

In 1856, he married the former Catherine Allen, a Canadian who had come to San Francisco with her sister. The couple had four children.

In 1859, he moved to Oakland where he went into the livery stable business with his brother at 1st and Broadway. Newland rented from Oakland founders Horace Carpentier and Edson Adams.

Newland who had made friends with many of the Comstock millionaires in San Francisco (Flood, Ralston and Fair), soon became friends with the millionaires on the eastern side of the Bay (Merritt, Castro and Hayward). He regularly hosted parties for Oakland’s emerging high society at his home. He also constructed the Newland Hotel, which stood at 7th & Broadway. He started breeding race horses, including many for Senator Leland Stanford.